Pulmonary cavitation is a loss of substance secondary to the removal of pus or necrotic tissue, or the evacuation of cysts (Figure 16-1).

The set of symptoms and signs produced by the cavities constitute the cavitary syndrome.

For a clinically detected clean cavitation, it is necessary that it meet a series of conditions: size, location, bronchial communication, condensation of the surrounding parenchyma, content and condition of its walls. These conditions are governed by fundamental laws.

Minimum volume . No lung lesion can cause stetoacoustic signs if it does not occupy a sufficient volume and in general quite large. Otherwise, the respiratory sound of the neighboring region spreads over the injured area. The size must not be less than 3 to 4 cm.

Depth . a lung lesion far from the surface, in a central region, is not discovered by semiological maneuvers.

Transmission . This law refers exclusively to murmurs, the transmission of which depends on the following factors:

- if there is a pathological alteration at the level of the larynx (paralysis or destruction of the vocal cords), no murmur occurs.

- It is essential that the airway is permeable; if it is obstructed (bronchogenic tumor, foreign body), the murmur does not originate.

- If the width of the thorax is greatly diminished, as occurs in diaphragmatic paralysis, the murmur does not occur. If the amplitude is exaggerated, as in emphysema, the intensity of the murmur may increase.

Complacency . In diffuse pulmonary fibrosis, with greatly diminished compliance does not originate.

To the laws analyzed corresponds to add other conditions necessary to define the characteristics of the syndrome:

Pericavitary condensation . It may or may not exist, have a large or small thickness.

The causes of the syndrome are several:

Tuberculosis . Cavitation is a characteristic feature of tuberculosis. It is due to the evacuation of the caseous material as a consequence of the unfavorable evolution of a bronchopneumonic lesion. 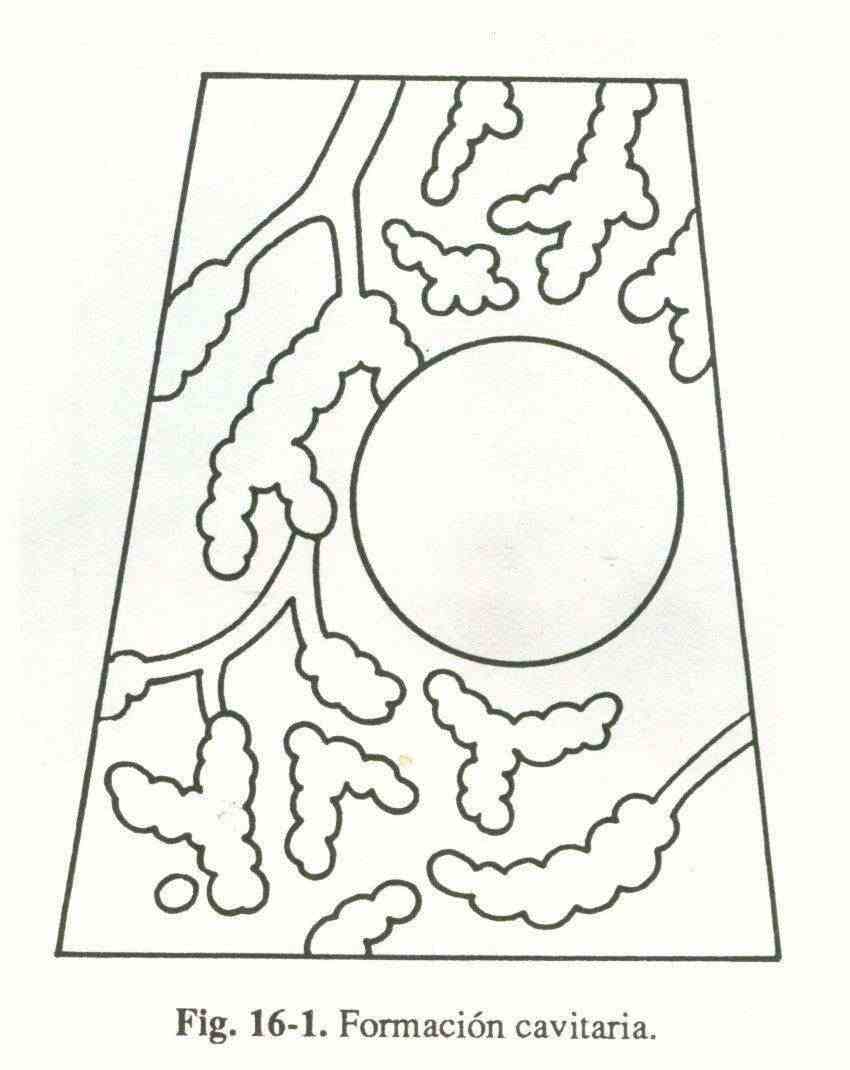 Bronchogenic carcinoma . It can cavitate due to a loss of central necrotic substance within the tumor mass. Another mechanism is the obstruction of a bronchus, with infection, necrosis and cavitation in the lung parenchyma far from the tumor; it occurs in non-neoplastic tissue (Fig. 16-2).

Primitive abscess of the lung . They are those that settle in a previously healthy parenchyma. Germs reach the lung in the following ways:

Congenital cysts . They can be the following:

Hydaitid cyst . Produced by a parasite called a granular echinococcus.

Metastatic carcinoma . Only 4% of metastatic tumors cavitate and are generally squamous cell.

Mycosis . The lesions of coccidioidomycosis and histiplasmosis often cavitate.

The cavities can be asymptomatic, but when they produce symptoms the most common are the following:

Cough . It can be dry or accompanied by secretions.

The signs are only confirmed when conditions are indicated when analyzing the pathophysiology of cavitary syndrome.

The inspection is irrelevant to the presumptive diagnosis of a cavity.

On palpation, vocal vibrations vary according to the degree of pericavitary condensation. When it is important they are increased, when it does not exist they are diminished.

In percussion the loudness can be increased when the cavity is large, shallow and empty. If it contains liquid or if the pericavitary condensation is considerable, dullness is verified. 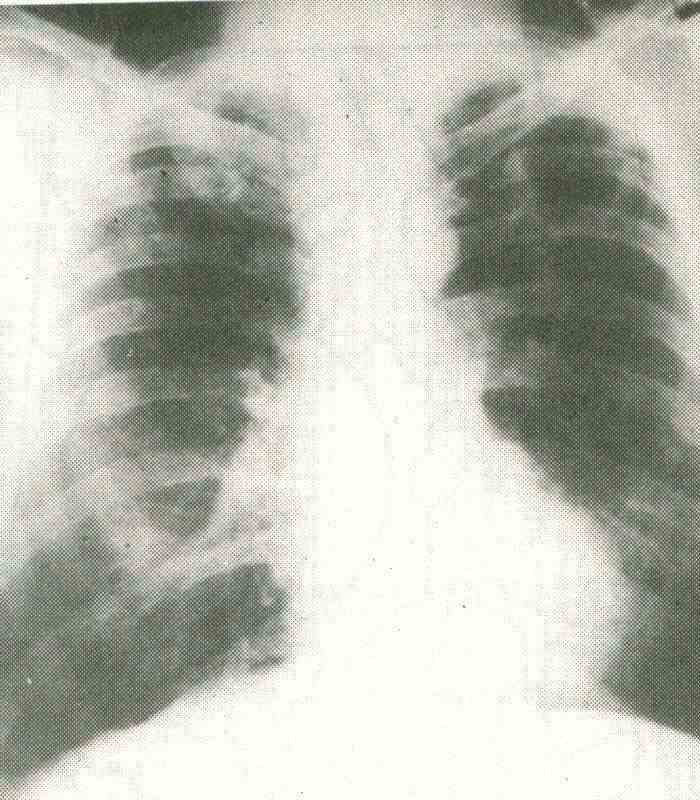 In the auscultation of the superficial cavities, of a certain size, smooth walls, communicating with a bronchus, and with pericavitary condensation, it is appreciated that they act as resonators, modifying the timbre of the transmitted laryngotracheal noise. They originate the cavitary or cavernous murmur that is intense, predominates in inspiration, has a low tone and a hollow timbre. The murmur is more easily perceived when the cavity is more superficial; when it is small in size, far from the surface and with abundant condensed tissue, the murmur acquires the characteristics of a tubal. When the cavities are more than 6 cm in diameter, secondary vibrations are created that generate a so-called amphoric murmur. It has a metallic timbre and a lower tonality than the cavernous one. Crackles can be heard.

The presumptive diagnosis of cavitary syndrome is made by anamnesis and physical examination. The diagnosis of certainty by radiographic examination. The typical radiographic image is composed of the following factors: clear-rounded image, pericavitary condensation, horizontal fluid level and drainage bronchus. These signs are excellently observed in their entirety, especially the latter.
Once the cavitria image has been diagnosed, it is necessary to find the etiological agent that originated it.

The history of having suffered tuberculosis and that of an exposure to this disease, added to a syndrome of bacillary impregnation and hemoptysis, suggests that the cavity of this etiology. Primitive bronchogenic abscess should be suspected if data of alcoholism, dental caries, subacute evolution and fetid expectoration are collected. The possibility of suffering from bronchogenic carcinoma is great if the patient is a man over 40 years of age, a smoker, and consults for hemoptoic sputum. The geographic history is important to suspect hydatidosis, coccidioidomycosis, and histoplasmosis. Having an extrapulmonary malignancy leads to cavitary metastasis. An extrapulmonary staphylococcal septic focus in an early childhood child suggests pneumatocele. Pulmonary sequestration is characterized by being asymptomatic; so are bronchogenic cysts. Bronchiectasis is suspected by profuse and purulent expectoration that is accentuated by changes in position. Bilateral mediastinal adenopathies guide the diagnosis of malignant lymphomas.

The chances of a physical examination of the chest contributing to the differential diagnosis of the cavities are slim. Supraclavicular adenopathies and metastases in other organs can be found in patients with bronchogenic carcinoma and tumors originating in other tissues, extrathoracic localization in tuberculosis, mycoses, Wegener's granulomatosis and rheumatoid nodules. It is also possible to find in malignant lymphomas.

Radiographic examination . Conventional radiographs. Location and distribution, segmental or not, are shown with the corresponding front and profile. To study the apical area, a caudoapical position is used, which allows a better visualization of said region.

The tuberculous cavern can be single or multiple, small or large, and is most frequently located in the apical segment of the lower lobe and in the apical and posterior segments of the upper lobe (Fig 16-

3). It can have a hydroair level with a wall measuring 2 to 5 mm thick and smooth or irregular contours.

Bronchogenic carcinoma usually presents as a thick-walled and irregular aerolar image (Fig. 16-4), occasionally bulging within the cavity (rock sign). Sometimes the wall is very thin, the product of an almost total necrosis of the tumor. It is rarely an abscess distal to the bronchial obstruction due to the neoplasm. The distribution is segmental but not selective.

The primitive bronchogenic abscess is generally single, thick-walled, with an air-fluid level and a preferential location in the apical segments of the lower lobe (Figure 16-5) and posterior segments of the upper lobe.

Bronchogenic cysts that establish communication with a bronchus form a thin-walled cavity, frequently with an air-fluid level.

Pulmonary sequestration cysts are seen as cavities when they become infected and drain into a bronchus. They are thin-walled, with or without hydro-air level; the usual location is the posteroinferior region of the right lower lobe.

Subpleural vesicles are small in diameter, multiple, located in the apical segment of the upper lobe, and are not usually visualized on conventional radiographs.

Cystic bronchiectances can be evidenced as aerolae 1 to 2 cm in diameter, thin-walled and located in one or more segments or lobes. 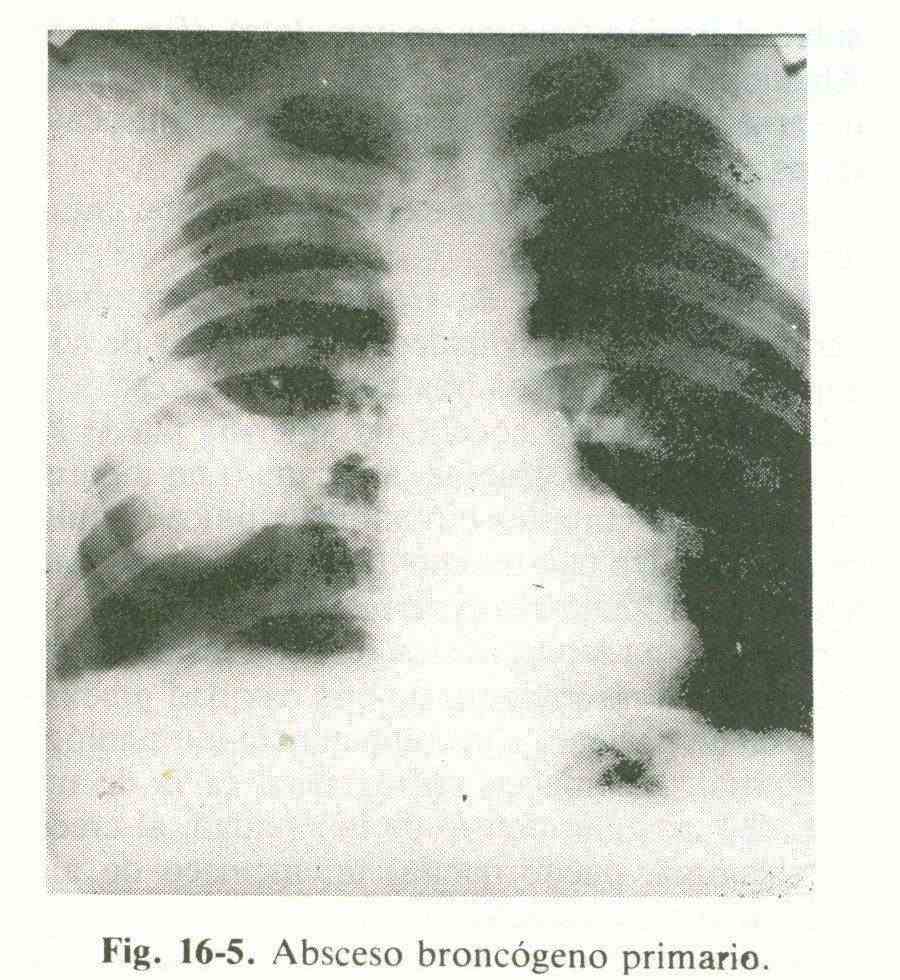 The hydatid cyst is seen as a cavity when a bronchus opens and air enters between the cyst and the lung or directly inside the cyst, after evacuating part of its contents. The air contained between the adventitia and the cystic membrane gives rise to a hyperclarity known as perivesicular emphysema or perineumocyst (Fig. 16-6). As air continues to penetrate into the adventitia, it is detached until the parasitic membrane is fissured and part of the hydatid fluid escapes through a bronchus. The germinal membrane folds, separating from the adventitia, and being visualized radiologically as a double arc image (Fig 16-6) that is made up of an upper arch (adventitia), an intermediate arch (germinative) and a lower semicircle that corresponds to the rest. of the cystic liquid. On continuing to evacuate, the membranum folds due to the increase in air pressure and appears supernatant on the liquid (camalot image fig 16-6). Some of the signs of hydatid cyst can be seen in mycetomas and intracavitary clots.

In Hodgkin's disease, one or more cavities may be seen, accompanied by bilateral and hilar mediastinal lymphadenopathy.

The cavity of coccidioidomycosis can be smooth or thick-walled, associated or not with disease of the surrounding parenchyma, single or multiple. It is usually located in the anterior segment of the upper lobes.

Aspergillus or candidiasic mycetoma is a non-invasive, non-invasive colonization of a pre-existing cavity in a patient with normal immune competence. The radiographic image is that of an irregular opacity within the cavity; As the mycetoma grows, a characteristic sickle air meniscus may remain.

Linear tomography . It is indicated when the surrounding parenchyma, pleural involvement, superposition of stelestal tissue, soft tissue, cardiovascular and diaphragm opacity, mask the cavity. It is useful to demonstrate it and it should be requested when the clinical and radiological picture suggests it.

Bronchography . It is indicated to detect cystic bronchiectasis,

Centellography and computed axial tomography . They are requested in a limited way to study cavities.

Laboratory examination . Predominant polymorphonuclear leukocytosis and toxic anemia are found in primitive abscesses and infected cysts and bronchiectasis. Eosinophilia is found in hydatid cyst, particularly if it ruptures, and in Hodgkin's disease. Erythrocyte sedimentation is accelerated in infectious and neoplastic processes. Blood cultures can be positive in abscesses, preferably hematogenous ones. Arcocinco is positive for hydatid cyst. The serology of coccidioidomycosis and histoplasmosis is useful for diagnosis if it is positive at sufficiently high titers.

Transcricothyroid puncture . It is extremely useful for determining the etiologic agent in infected bronchogenic abscesses, cysts, and bronchiectasis.

Fiberoptic bronchoscopy . It is indicated in most patients with cavitary lesions, although the diagnosis seems obvious. Biopsy material is taken from all tissue considered abnormal on visual examination, and secretions are collected for analysis. The percentage of positivity is high in bronchogenic carcinomas and tuberculosis.

Angiogram . Pulmonary sequestration is diagnosed when the presence of an aberrant artery arising from the aorta is demonstrated angiographically.

Thoracotomy . It is only indicated when the specific diagnosis is not obtained after a complete investigation. Your prescription is exceptional.