The mediastinum is a space occupied by numerous closely related organs. This condition explains why the most varied processes in the region, especially tumors, determine a set of syndromes resulting from the compression or invasion of one or more organs, simultaneously or consecutively. These syndromes are called mediastinal.

To study and correctly interpret the syndromes, it is essential to know the anatomy of the area.

The mediastinum comprises the portion of the thorax bounded in front by the sternum, behind by the vertebral column, laterally by the inside of the lungs, upwards by the superior opening of the thorax and downwards by the diaphragm.

The numerous organs housed in the mediastinal, the different way of reacting to the pathologies that develop in it, the symptoms and signs they generate, and the free spaces where diseases can reach large volumes without modifying normal visceral functioning, they justify a division that allows an exact interpretation of the symptoms, the location through radiology and the presumptive diagnosis.

On the basis of this division, the content of the various zones will be analyzed.

In summary, the upper and middle previsceral behaviors, and the lower retrovisceral, are extensive, and the pathologies that settle in them can evolve for a long time without causing symptoms.

In the upper and middle visceral mediastinum there are a large number of viscera that cause syndromes when displaced and / or compressed. In the lower visceral mediastinum and part of the middle, the presence of the heart causes the various pathologies to deviate towards the respective hemithorax.

In most cases, mediastinal syndromes are caused by tumors, rarely by vascular disease, acute and chronic inflammations, and exceptionally by emphysema, hemorrhage and mediastinal displacement due to pressure or traction.

Carcinomatous metastases . They produce malignant lymphadenopathy, corresponding to the different ranges of distribution (Fig. 20-2). The most common cause is bronchogenic carcinoma. Less commonly, tumors of the breast, upper gastrointestinal tract, testicles, prostate, and kidneys.

Primitive mediastinal tumors . Those that are non-ganglionic, non-vascular (aneurysms) and do not originate in the trachea, bronchi, esophagus, and heart are considered primitive (Fig. 20-3).

Vascular injuries . They include heart disease causing significant cardiomegaly and aneurysms of the thoracic aorta.

Diseases of the digestive tract . Megaesophagus and voluminous diaphragmatic hernias.

Acute and chronic mediastinitis . It is the inflammation of the cellular tissue that surrounds the organs contained in the mediastinum. 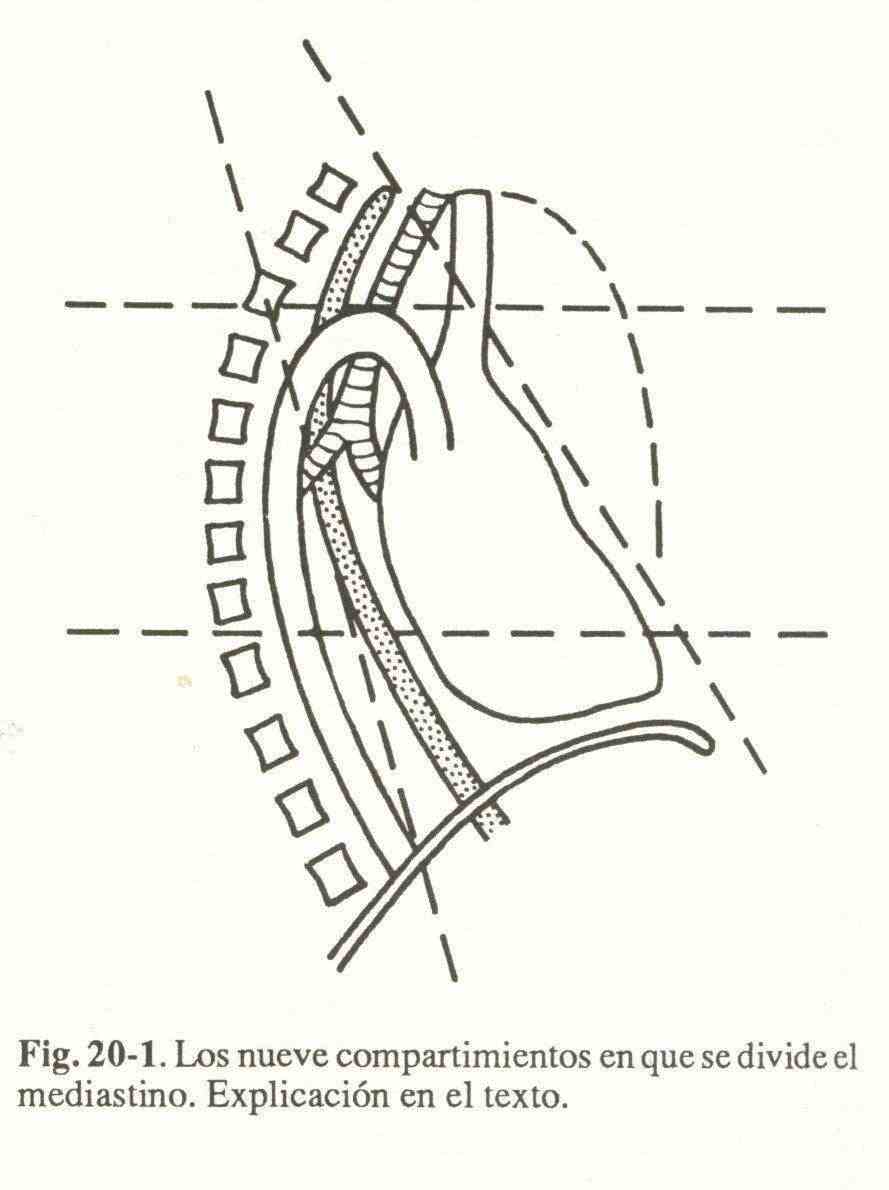 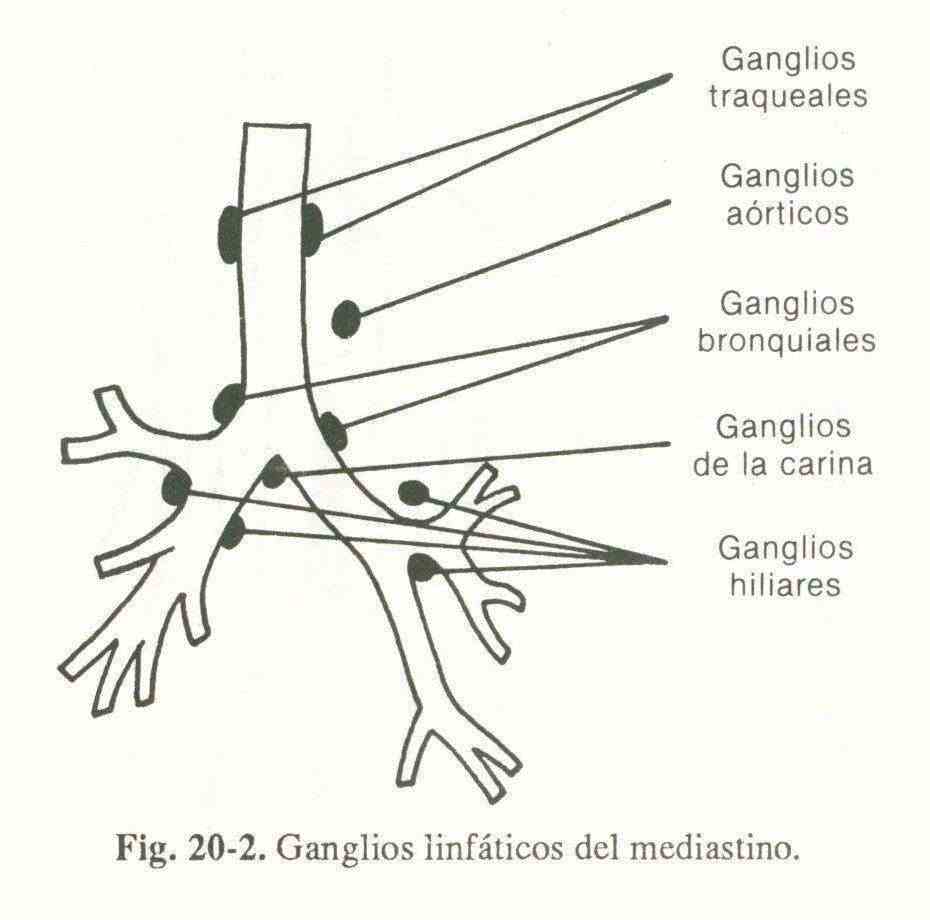 The organs housed in the mediastinum can be displaced, compressed or invaded by numerous agents, determining symptoms and signs. These manifestations are due, in most cases, to mediastinal lymphadenopathy produced by carcinomatous metastases.

1. Venous compression . The veins are easily compressed due to the low resistance of their walls. It is the most prominent syndrome of mediastinal pathology, and the one that is immediately imposed on inspection of the patient. A diagram of the circulation in the cava system is shown in Figure 20-4.

Superior vena cava . It is the main conduit for the return of blood to the right heart from the head, neck, upper chest, and upper extremities. The syndrome appears in cases of obstruction to blood flow as long as the circulation of the inferior vena cava remains undamaged. Both innominate veins and arteriovenous fistulas between superior cava and ascending aorta also develop in obstruction.

The clinical picture depends on the stasis of the veins that drain the blood from the upper part of the body and its manifestations can be remarkable. The increased venous pressure, stasis, and insufficient drainage produce edema due to fluid leakage from the lower veins.

Symptoms . As a consequence of cephalic venous stasis, the patient complains of headaches, dizziness, ringing in the ears, drowsiness, hearing loss, and exophthalmia. Rarely there are epistaxis, tracheal and esophageal hemorrhages, dysphonia, dysphagia, and seizures.

Signs . Cyanosis in the upper half of the body, especially in the face and in the lips and joint lobes. At the beginning it appears with the efforts and then it becomes permanent; its tint depends on the intensity of the obstacle and the time of evolution, and varies from weak blue to black blue.

The edema begins on the face, usually in the eyelids, and then spreads to the neck, upper chest and upper limbs. It is the so-called edema in cape: hard, elastic and that does not leave depression.

A major venous engorgement is visible in the neck and upper limbs. How rapidly it develops depends on the rate of the obstruction, as well as when the collateral circulation appears. 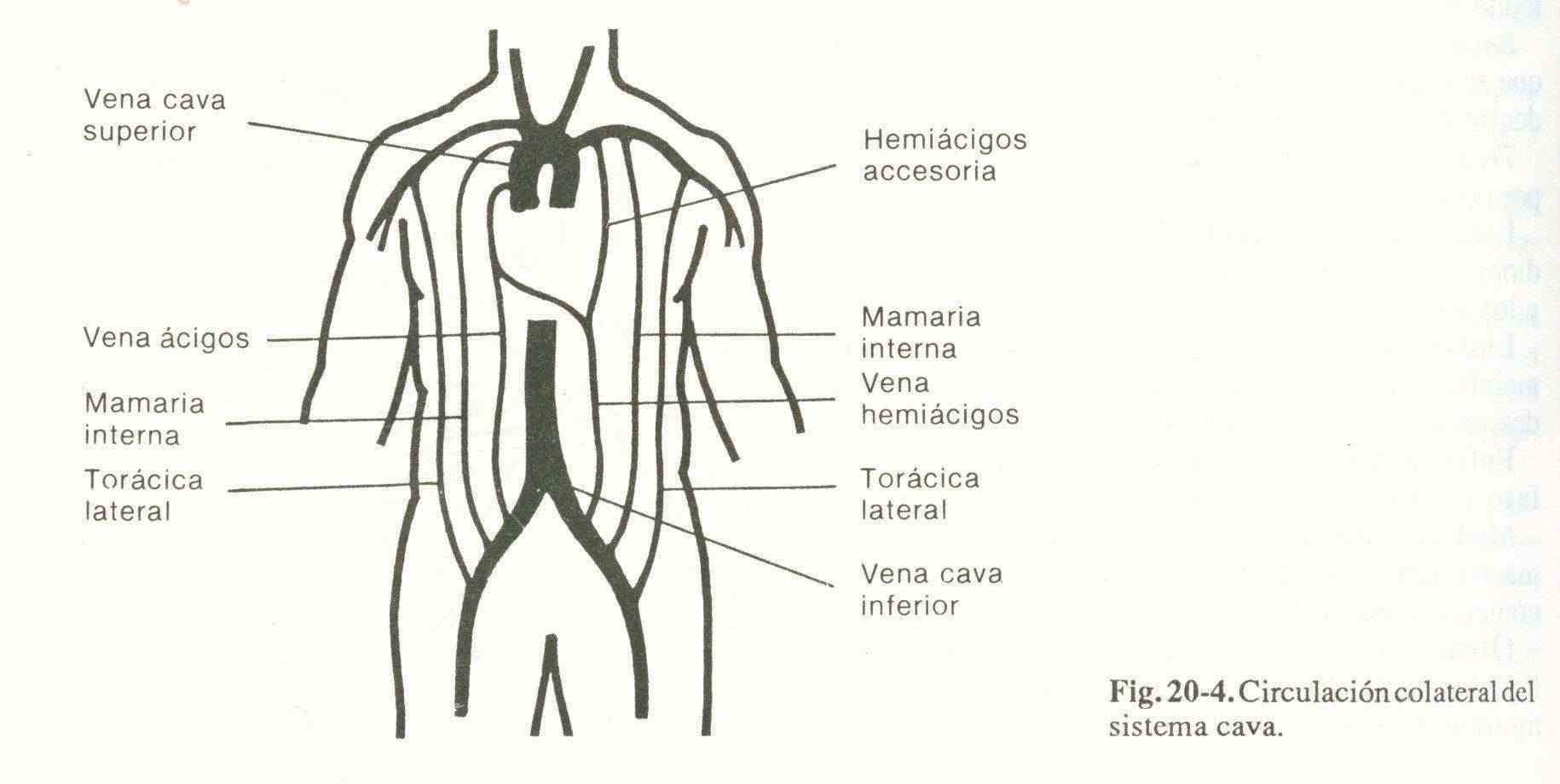 Collateral circulation allows blood to flow to the superior vena cava. The small superficial veins at the base of the neck, the anterior chest wall, the epigastric and subcutaneous veins of the abdomen, increase in size considerably. The current is from top to bottom and the characteristics of the circulation depend on the relationship of the obstruction to the azygous vein. If the compression is below the mouth of the azygos, there is little superficial collateral circulation because blood from the superior vena cava flows towards the azygos and through it, reversing the direction of the current, towards the inferior vena cava.

Brachiocephalic venous trunk . If the compression is unilateral, all the phenomena mentioned above are located in the corresponding half of the face, neck, thorax and upper limb. The collateral circulation is carried out in a transverse direction in the upper chest wall, diverting blood towards the internal mammary and thoracoaxillary on the opposite side and towards the anterior jugular. If both trunks are involved, the picture is similar to that of the superior vena cava.

Azygos vein . It generally does not cause symptoms, although it can occasionally cause hydrothorax and hemoptysis.

Inferior vena cava . Its compression at the mediastinal level is very rare. When it occurs, blood stasis appears in the territory of the inferior cava and the aorta. Collateral circulation is in the lateral parts of the thorax and abdomen, and the direction of the blood flow is from the bottom up.

2. Arterial compression . The arteries are hardly compressed due to the greater resistance and elasticity of their walls.

Pulmonary artery . Compression of the lungs causes a thrill and systolic murmur at the base of the heart, and sometimes peripheral cyanosis.

Aorta . It can be displaced but not compressed.

Brachiocephalic trunk . It causes a thrill, murmur, and a different radial pulse.

3. Compression of the thoracic duct . It usually causes chylothorax.

4. Compression of the nerves . The symptoms generated by the involved nerves are varied, and also the predominance of irritation or paralysis effects. Generally, arousal is followed by inhibition, although sometimes the first phase is missing.

Pneumogastric . The compromise of the pneumogastric is translated by a dry, hoarse cough in the form of carol-like attacks; also dyspnea, cone without paroxysms. In the circulatory system we found initial bradycardia due to excitement, followed by tachycardia and palpitations as a result of paralysis. In the digestive system, intermittent dysphagia, vomiting and gastralgia.

Recurring . The left is the most affected due to its extensive path and its relationships with the left paratracheal ganglia and the aortic arch. Arousal is followed by a suffocation crisis due to glottis spasms. (action on the arytenoid muscle).

The inhibition, if it is bilateral, is translated by a veiled, hoarse or hoarse voice, which intermittently at first, ends up being permanent. Because the vocal cords approach the midline, dyspnea and horniness are added. If the inhibition is unilateral, the voice and cough are muffled and bi-tonal as a consequence of paralysis of a single vocal cord.

Intercostals . Compression is manifested by intercostal pain radiating to the arms.

Sympathetic . Arousal of the sympathetic produces the Pourfour du Petit syndrome and its inhibition, the Claude-Bernard-Horner syndrome, with hot and dry skin on the affected side.

5. Compression of the esophagus . When esophageal stenosis is due to direct compression by a tumor, dysphagia is permanent. If caused by recurrent, intermittent excitation. Swallowing is always painful.

6. Compression of the trachea and bronchi . It causes a hoarse (barking) cough, predominantly inspiratory dyspnea, horniness, drawing, and cyanosis. The print is supraclavicular, suprasternal, intercostal and epigastric. When the obstruction is of a main bronchus, the symptoms are unilateral. If the compression is very marked atelectasis occurs.

Most mediastinal syndromes are diagnosed by history and physical and radiographic examination of the chest. Once the syndrome has been detected, it is necessary to investigate the etiological agent that originated it. 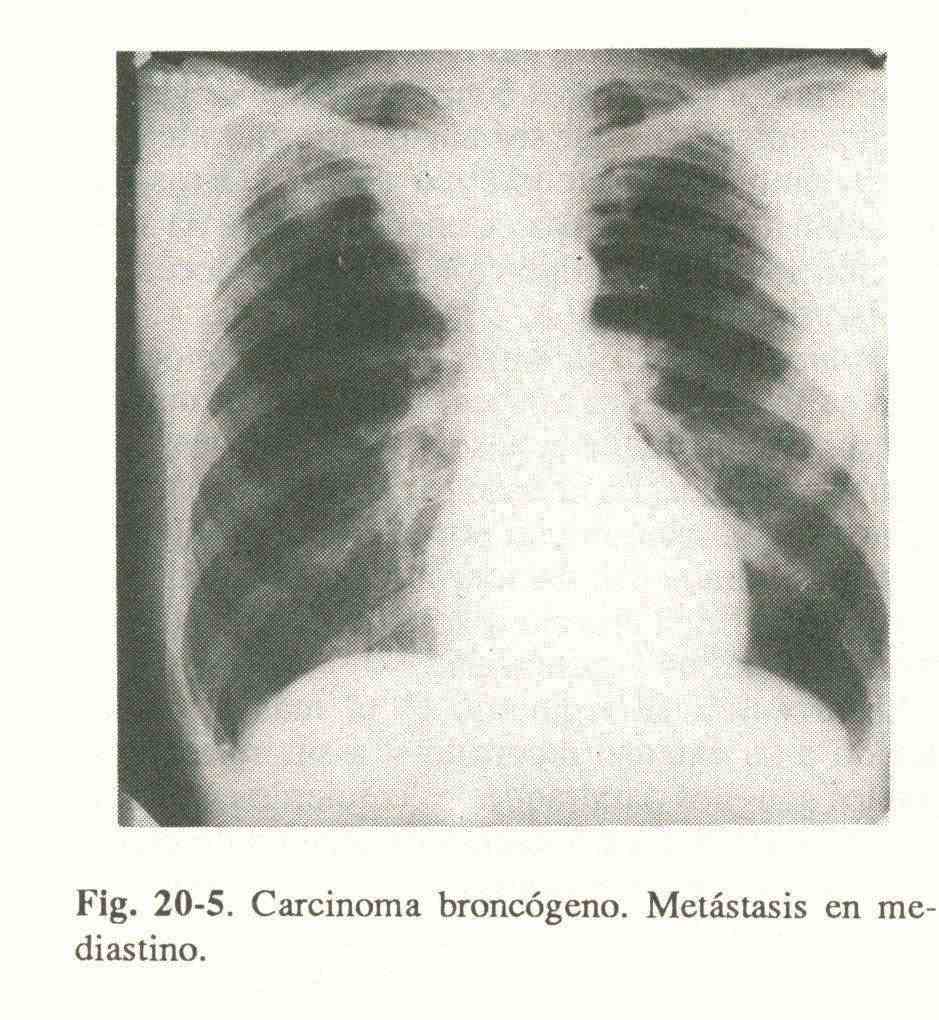 When the location of the pathology is posterior, it can compress vertebrae and cause pain in that region of the thorax. It also tends to compromise the intercostals, causing segmental radicular pain. It is the usual location for neurogenic tumors and aortic aneurysms.

Thymic tumors, teratomas, endothoracic goiters, and cystic lymphagiomas are usually located in the anterior mediastinum. They can compress the breastbone and cause pain. 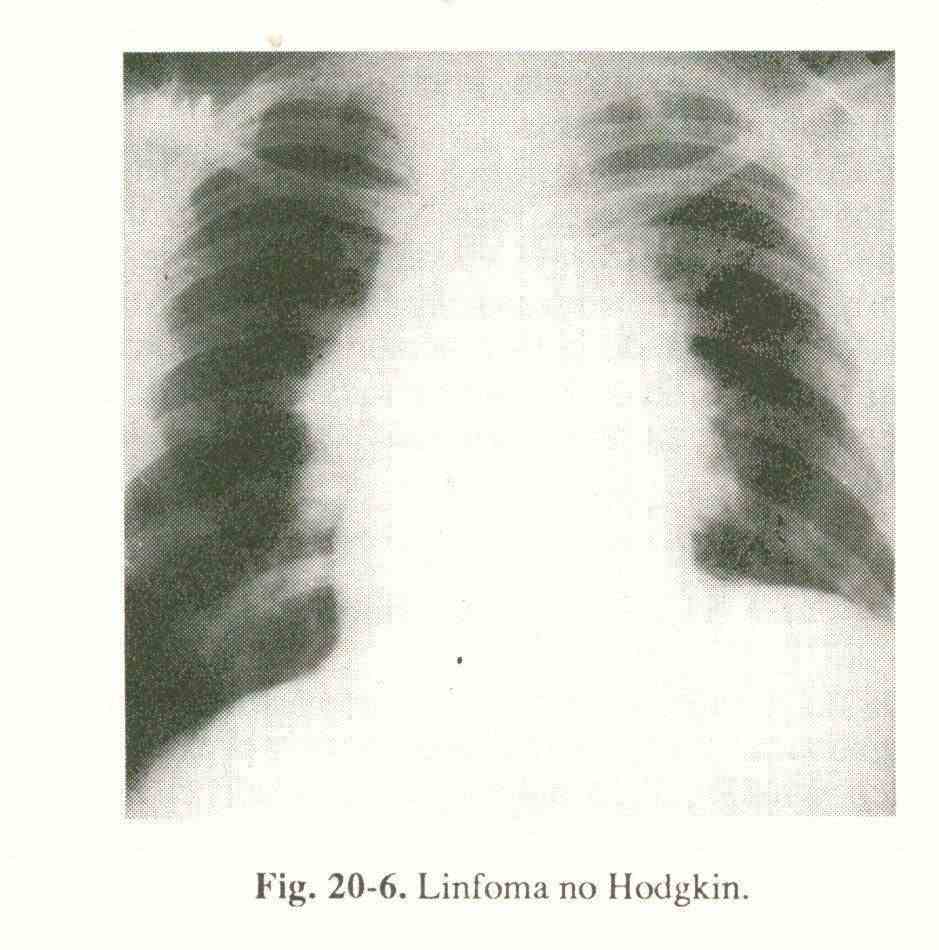 Lymph node metastases from bronchogenic carcinoma or other organs, the aortic aneurysm and megaesophagus, are located in the middle mediastinum, where they can compress the superior vena cava, the trachea, the nerves and the esophagus, intense chest pain leads to acute mediastinitis , carcinomatous metastasis and aortic aneurysm; myasthenia gravis is associated with thymic tumors; and bronchial carcinoma with paraneoplastic syndromes (osteoarticular, neuromuscular disorders, carcinoid, hypercalcemia, inappropriate antidiuretic hormone secretion).

Radiographic examinations . Conventional chest radiographs . In most cases, the radiographic pair reveals the presence and location of the mediastinal mass.

Aneurysms of the transverse portion of the arch of the aorta can protrude to either side. Those of the descending crook do it to the left.

Radioscopy . It allows to observe that a retrosternal thyroid ascends with swallowing; helps to detect alterations in the contour of a pericardiocoelomic cyst when changing the position of the patient; to differentiate tumors from pulsatile aneurysms, to identify dilation of the azygous veins due to changes in size when changing position and performing the Valsalva maneuver.

Computed axial tomography . It is useful for demonstrating occult lesions, investigating abnormal hila and mediastinum, studying the location and extent of tumors, and determining the density of pathologic tissues.

The mediastinografía , the bronchography , the lymphangiography , the esophagogram and radioisotopes limited utility for detecting mediastinal lesions.

Laboratory tests . They are generally of little help in the diagnosis of mediastinal disease.

Aplastic and erythroblastic anemia and hypogammaglobulinemia can be found in thymic tumors; hypercalcemia in Sarcoidosis; bronchogenic carcinoma and bone metastases; eosinophilia in malignant lymphomas; accelerated erythrocyte sedimentation in infections and neoplasms; Positive Mantoux reaction and positive sputum for acid-fast bacilli in tuberculosis; Sputum positive for neoplastic cells in bronchogenic carcinoma.

Thoracentesis and pleural biopsy . Pleural effusions can be associated with bronchogenic carcinoma, lymphomas, and some primitive mediastinal tumors.

Ultrasonic ultrasound . It can be helpful in diagnosing pericardiocoelomic cysts.

Fiberoptic bronchoscopy . It is of enormous value in the diagnosis of bronchogenic carcinoma.

Prescalenic and supraclavicular lymph node biopsy . Bronchogenic carcinoma, other malignant tumors, Hodgking and non-Hodgkin lymphomas, sarcoidosis, and leukemias can metastasize to these nodes.

Mediastinoscopy . It provides information similar to a prescalenic lymph node biopsy, but its diagnostic positivity is higher in percentage.

Mediastinostomy . It is indicated to biopsy material from lymphadenopathy or retrosternal tumors.

Aspiration biopsy puncture . It is only used to diagnose lung parenchymal lesions.

Exploratory thoracotomy . It is indicated when all the methods considered above do not allow the diagnosis of the disease that led to the mediastinal syndrome.