Hematemesis is a fresh and red hemorrhagic vomit, bright when it is acute and in coffee grounds when the loss is slow and in small quantities.

The mane is a tarry black stool with a very unpleasant odor. Its characteristics are the product of the degradation of the blood through the passage through the digestive tract and should not be confused with dark stools resulting from the ingestion of exogenous pigments such as iron or bismuth.

Hematochezia is the discharge of bright red or dark red blood from the rectum in the form of pure blood, blood interspersed with stool, blood clots, or bloody diarrhea.

Gastrointestinal bleeding can be hidden and is evidenced only by special stool tests (Benzidine test).

Finally, patients may not have objective signs of gastrointestinal bleeding and symptoms of blood loss such as dizziness, syncope, dyspnea, angina, or even shock.

In the management of patients with gastrointestinal bleeding, the first thing that must be quickly evaluated is the patient's hemodynamic status and compensated only after determining the origin of the bleeding, stopping it, and preventing a new episode.

According to how the digestive bleeding manifests, we can predict the approximate site of the bleeding. Hematemesis indicates an upper digestive origin above the ligament of Treitz. Melena indicates that blood has remained in the gastrointestinal tract for more than 14 hours and is the result of the breakdown of hemoglobin by bacteria in the colon. The further the hemorrhagic site is from the rectum, the more likely it is that melena can occur, which is why it is almost always related to etiologies of the upper intestinal gastric tract. The lesions of the colon that produce melena are rare and are almost always located in the proximal colon, depending on the colonic peristaltic movements, a slow transit favors the presence of melena.

The hemorrhagic lesions of the small intestine can manifest as melena, if the transit is slow or as hematochezia.

Bleeding from esophagitis is rare, ranging from 0% to 8%, and its presence suggests an esophageal ulcer. Anemia and occult blood in fecal matter are very common findings in esophagitis and hiatal hernias.

Mallory-Weiss tears constitute 5% of cases of upper gastrointestinal bleeding and are preceded by vomiting, gagging or coughing, especially in alcoholic patients. Bleeding subsides spontaneously in 80-90%.

Portal hypertension can cause gastrointestinal bleeding through esophageal or gastric varices and gastropathies or enterocollopathy.

Peptic ulcer is the most common cause of acute upper gastrointestinal bleeding in approximately 50%. duodenal ulcer bleeding is more common than gastric ulcer bleeding. The primary pathogenetic mechanisms of these ulcers are: acid, Helicobacter pylori, and ingestion of NSAIDs.

Most ulcers stop bleeding spontaneously and to a lesser extent are severe or recurrent hemorrhages in whose patients the mortality rate is increasing. The clinical aspects that influence the increase in mortality are hemodynamic instability, advanced age (over 60 years) and the presence of concurrent diseases.

It is important to clarify that gastritis is a histological diagnosis that indicates inflammation of the gastric mucosa. There is no evidence that histological gastritis causes upper gastrointestinal bleeding. The term hemorrhagic and erosive gastritis refers to endoscopically visualized lesions (hemorrhages and subepithelial erosions) that can cause hemorrhage. Given that there is no definitive association between macroscopic abnormalities and histopathological gastritis; the former should not be labeled as gastritis but rather described as subepithelial hemorrhages and erosions.

In 18 endoscopic studies of upper gastrointestinal bleeding (8000 patients) gastritis was considered the cause in only 16%.

GI Tract neoplasms cause chronic occult bleeding and are not a common cause of upper gastrointestinal bleeding.

Vascular abnormalities are much more common as a cause of lower gastrointestinal bleeding.

Angiodysplasias are more frequent in the elderly and are more often found in the colon (cecum and ascending colon) and rarely in the small intestine and stomach.

When bleeding occurs, blood volume decreases with a reduction in venous return and systolic volume with consequent increase in sympathetic activity (tachycardia).

The decrease in stroke volume reduces the perfusion of the different organs and systems. Coldness and peripheral cyanosis occur in the skin. In the kidney, oliguria occurs in a first stage due to a decrease in glomerular filtration pressure, which if maintained, leads to tubular necrosis with acute renal failure. In the respiratory system, respiratory tachypnea appears preceded by metabolic acidosis due to hypoxia and increased production of lactate and pyruvate.

In the CNS there is agitation, confusion, dizziness, vertigo, blurred vision and clouding, which can lead to syncope.

In gastrointestinal bleeding, the patient's hemodynamic status must be quickly assessed.

Vital signs are recorded, skin and mucosa are inspected for paleness or signs of shock. A loss of less than 500 ml. it is rarely associated with symptoms of hypovolemia and hypoperfusion. Initially the only physical finding may be postural hypotension; in other words, in the supine position, BP is maintained, but falls by more than 15 to 20 mm Hg. when the patient sits (Tilt Test). What is indicating a loss greater than 1000 cc

The general physical examination should include the study of the skin, observing the color and temperature; that of the mucosa is to look for telangiectasia, and the investigation of signs of chronic liver disease such as parotid hypertrophy, gynecomastia, ascites, edema, telangiectasias, testicular atrophy, Dupuytren retraction and loss of body hair. The existence of joint disease may suggest the intake of anti-inflammatory drugs.

Auscultation of the abdomen may show increased air-fluid noises in active bleeding, due to the irritating action of blood on the intestinal mucosa

Renal examination is a fundamental examination that should not be omitted since it defines the presence of blood, as well as the diagnosis of low lesions (tumors, hemorrhoids). 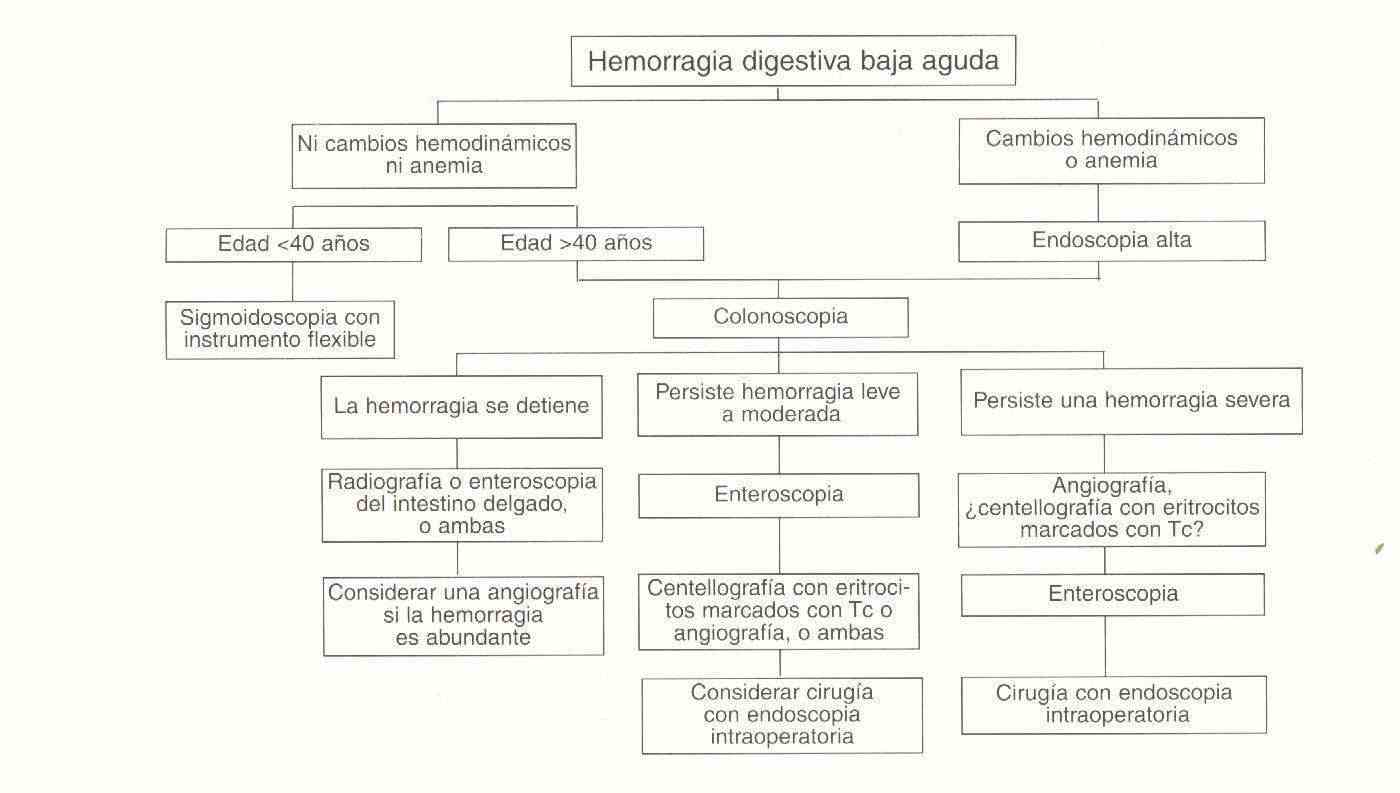