Gastroesophageal reflux disease (GERD) is the clinical manifestation or histopathological alteration produced by the presence of gastric contents in the esophagus or in supraesophageal areas (pharynx, larynx) and also in airways where odynophagia, chronic cough or bronchospasm it may be the reason for consulting this pathology.

Reflux esophagitis (ER) is defined as the histopathological changes that the mucosa undergoes in a subgroup of patients with Gastroesophageal Reflux Disease differing from Hiatal Hernia, which is an anatomical change characterized by displacement of the gastroesophageal junction above the diaphragm.

Making this difference makes it clear that not only the symptoms but also the consequences of reflux should be treated because the activation of the metaplasia - dysplasia - neoplasia sequence constitutes the most severe complication of Gastroesophageal Reflux Disease.

When the balance between what attacks the esophageal mucosa and what defends it is broken, the symptoms of Gastroesophageal Reflux Disease appear.

First, the antireflux barrier must fail, then the material that refluxes must be harmful enough to damage the esophageal mucosa, exceeding its defense capacity.

The antireflux barrier is formed by the Lower Esophageal Sphincter (LES), the diaphragmatic pillars (crural portion of the diaphragm) and the angle of His.

Before the 70s it was believed that the Lower Esophageal Sphincter was a high pressure area, that is to say a functional sphincter, later it was found that it is a true anatomical sphincter formed by circular muscle fibers of the lower esophagus and upper gastric oblique fibers with a increased nerve plexuses.

Normally the resting tone of the Lower Esophageal Sphincter ranges from 10 to 30 mmHg; decreases in the postprandial period and increases at night.

The contraction of the crura also accentuates the angle of His, which allows that when the fundus is distended it compresses the distal esophagus and in this way it is difficult for the contents of the fundus to move towards the esophagus.

Among the aggressive factors is the gastric and duodenal content. AC. Gastric hydrochloric acid is the one that refluxes the most and is the most symptomatic, but there is also pepsinogen that at a PH <4 is transformed into pepsin.

The duodenum provides bile (bile salts or acids) and pancreatic juice, which are less symptomatic, but there is evidence that the acid combined with the bile salts would be responsible for the metaplasia-dysplasia-neoplasia sequence.

In GERD, the interrogation plays a main role in the diagnosis because it involves clinical manifestations which the patient gets used to over time and does not consider them abnormal, hence a good anamnesis will give enough elements to think about this pathology.

Epidemiological evidence suggests that up to 80% of asthmatics have GERD and up to 40% have peptic esophagitis. The mechanisms by which bronchospasm would occur are the aspiration of gastric contents, especially in the supine position, or the activation of a vagal reflex arc from the esophagus to the lung (bronchoconstriction in response to esophageal acidification)

The main premise in the study of Gastroesophageal Reflux Disease is to know if there is a lesion in the esophageal mucosa and to be able to stage it; so it is necessary to perform a Digestive Endoscopy

High which reports the height of the mucosal change and the height at which the gastric folds appear; also facilitating the taking of samples for the histopathological study.

Ph metry evaluates the characteristics of the refluxed material; measuring the change from the usual esophageal PH (PH6) to a lower PH by the reflux of acidic material from the stomach; It must be remembered that at a PH <4 the pepsinogen is activated to pepsin, transforming the refluxed material into much more aggressive. The main drawback of this method are the false negatives that are seen when the refluxed material is of a Ph closer to neutral or alkaline, because they are interpreted as normal. 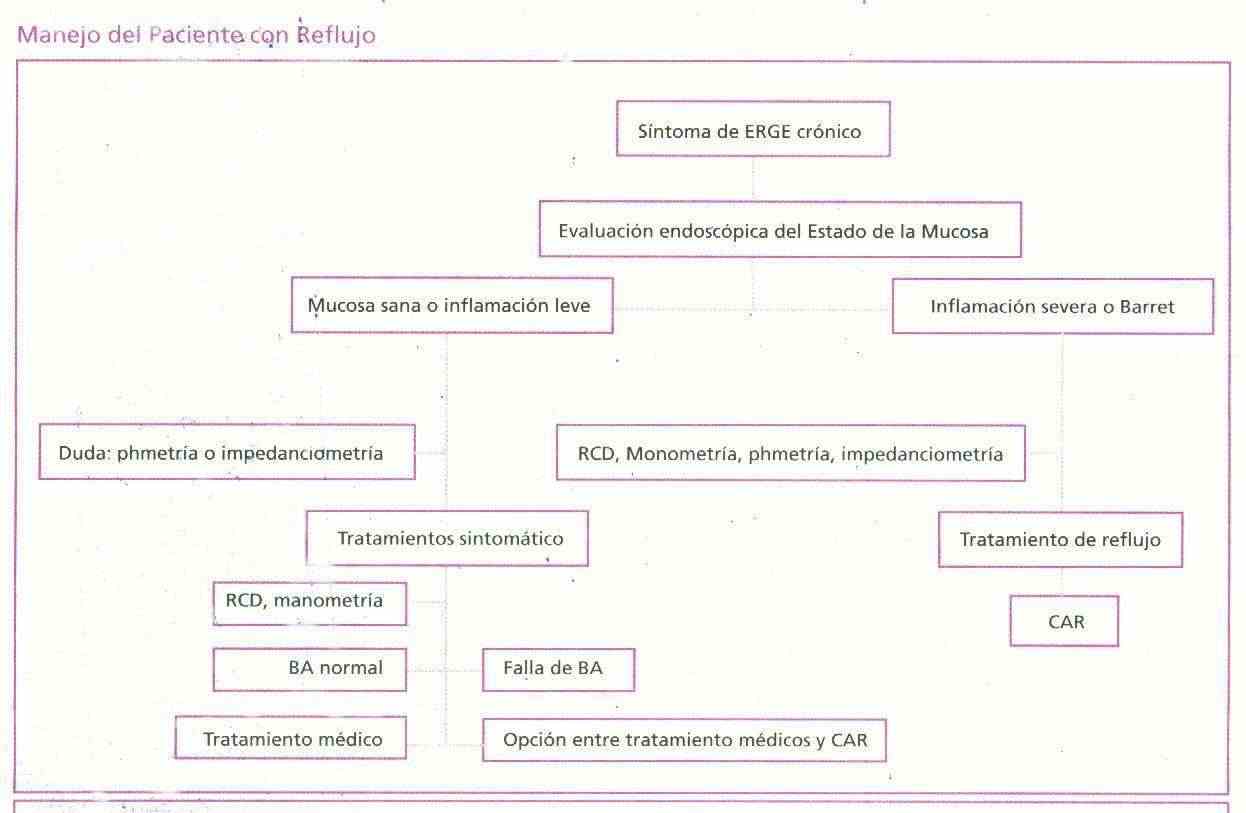 Before pharmacological use, the first thing to indicate is the following: modify the lifestyle by raising the head of the bed, avoiding the use of very tight clothing, restricting alcohol consumption, quitting smoking, diet, lowering weight, do not lie down after eating.

As a second measure, an attempt is made to neutralize the acid secretion with H2 receptor antagonists or with proton pump inhibitors (omeprazole-lansoprazole). Prokinetic drugs improve esophageal and gastric emptying and increase LES pressure.

The use of sucralfate must be added to the pharmacological treatment, which acts by protecting the esophageal mucosa and does not present undesirable effects because it does not absorb in the digestive tract.

Finally, antireflux surgery has specific indications such as:

Medical success, but at a high cost in a healthy young patient.