Gastroduodenal ulcer is a disease of unknown etiology; Its pathogenesis is polycausal, and it can be presented with the scale scheme (Fig. 28-1). Normally the defensive factors predominate over the aggressive ones and therefore there is no ulcer; On the other hand, when the balance leans towards aggressive factors, ulcers appear. Some of these pathophysiological factors will be analyzed. 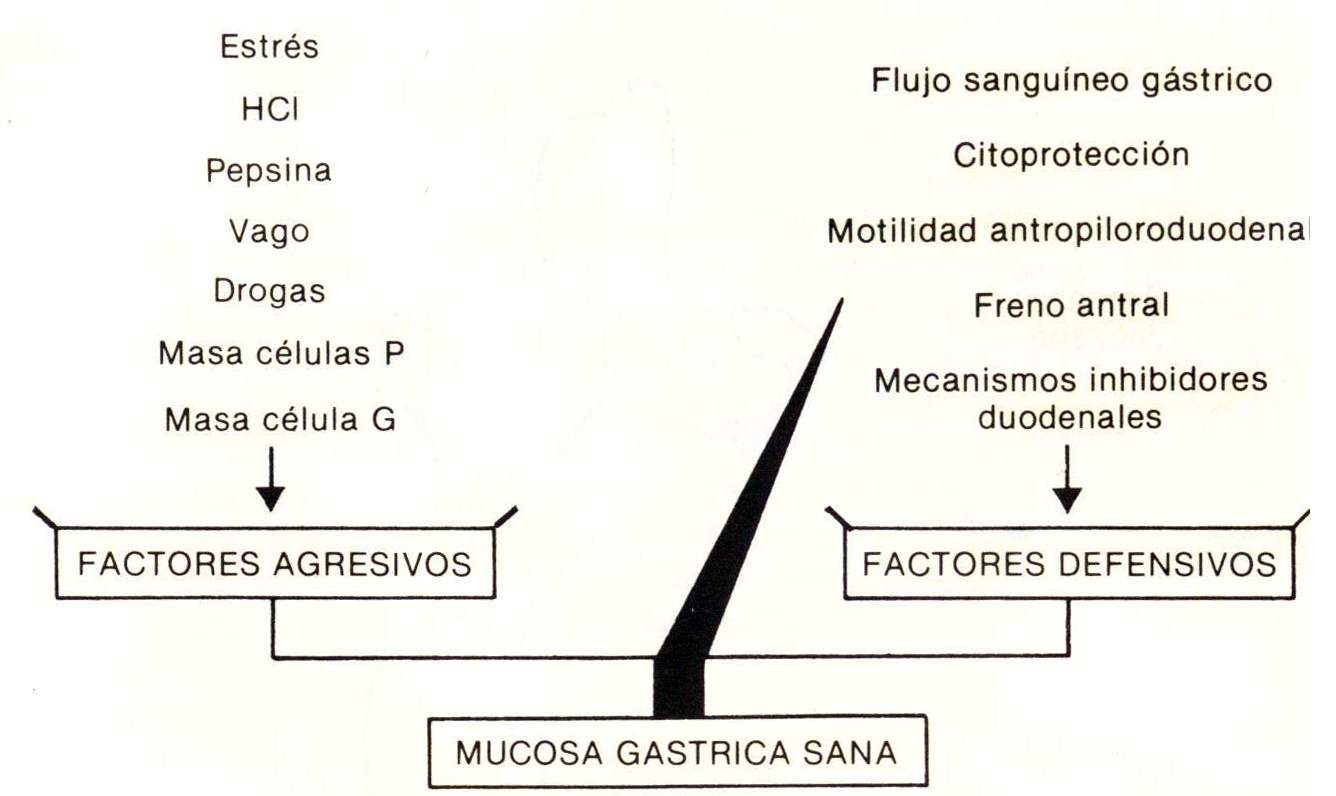 Aggressive Factors: 1) Stress: Examples are “acute stress ulcers”, in particular that of the great burn or Curling, and that of brain trauma or Cushing, whose pathophysiology does not differ from that of acute stress gastritis. Anyway, there are acute ulcers due to psychic stress, which cause hemorrhage, and even perforation of the gastric mucosa; 2) HCI there is no ulcer. It is proven that the hyperchloric acid and the hypersecretion of HCI caused in expenses produces gastroduodenal ulcer and that the Zollinger-Ellison syndrome almost always causes this same type of ulcer; 3) pepsin; The importance of elevated pepsinogen I in duodenal ulcer has been described as a strongly hereditary factor; pepsin has the same meaning as HCI; 4) the bum: the vagus nerve intervenes in gastric secretion by several mechanisms: a) by stimulation of parietal cells; b) by stimulation of the G cells of the antrum, producing gastrin; c) by superadditive synergism with gastrin in the stimulation of apriétal cell mass. The vagus nerve itself causes a 70% increase in gastric acid secretion, which is abolished by truncal vagotomy; 5) drugs: there are many drugs capable of producing gastroduodenal ulcers, such as aspirin, non-steroidal analgesics, indomethacin, phenylbutazone, naproxen, etc., by destroying the defensive barrier; 6) apriétal cell masses: congenital or acquired hyperplasia of the apriétal cell mass is common in patients with duodenal ulcer; 7) G cell mass:

Defensive factors: 1) Gastric blood flow: the typical gastric ulcer of the lesser curvature, type I, constitutes a so-called trophic ulcer due to inadequate gastric blood flow, where tissue hypoperfusion constitutes a recognized aggressive factor; 2) cytoprotection: the integrity of the gastric mucosa, with its defensive barrier, its normal pH gradient and therefore the control of H + backscattering, constitutes the other important defensive factor; prostaglandins, which are undoubtedly the fundamental substances that support the entire scaffolding of cytoprotection, increasing gastric blood flow, sodium bicarbonate, gastric mucus, sulfhydryls, the sodium pump, cyclic AMP are important in this regard. and proton backscattering; 3) anthropiloroduodenal motility: the failure of the antral systole and the hypotonia of the pylorus facilitate bile reflux and therefore the destruction of the defensive barrier; 4) antral brake mechanisms: the gastric antrum, depending on whether its pH is alkaline or acidic, stimulates or inhibits gastrin production, respectively. It was shown that this self-regulation mechanism is given by two hormones, bombesin and antral somatostatin. The duodenal ulcer does not control its acid hypersecretion due to a decrease in antral somatostatin; 5) Duodenal inhibitory mechanisms: the duodenum is a hormone-producing viscus where the arrival of HCI releases secretin, which on the one hand stimulates pancreatic juice, bicarbonate and neutralizes HCI, and on the other it blocks gastrin. Likewise, duodenal somatostatin is released, which is an antigastrin hormone; Another hormone, VIP or vasoactive inhibitor polypeptide, is also antigastrin. The Brünner duodenal glands secrete bicarbonate and in particular epidermal growth factor which is cytoprotective of the gastric and duodenal mucosa.

Ulcers most commonly occur when these defensive mechanisms are disrupted by overlapping processes such as Helicobacter pylori infection and ingestion of NSAIDs. 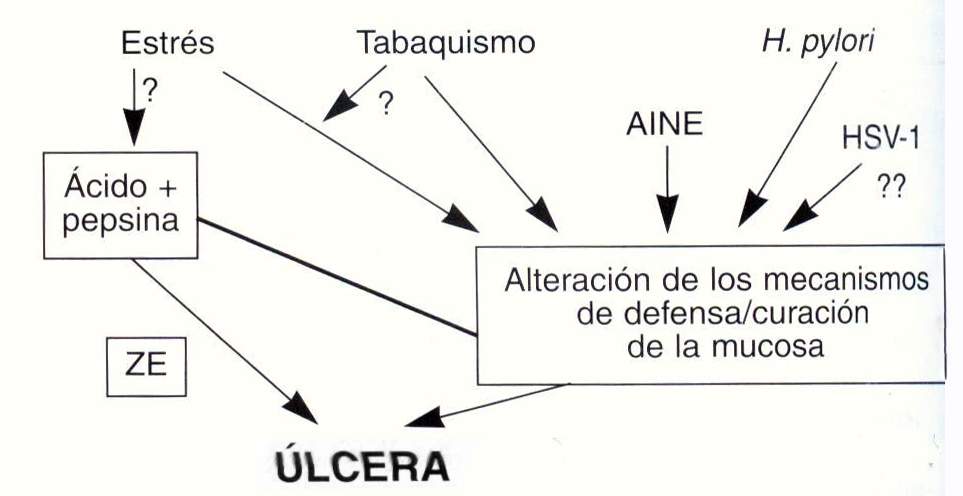 Ulcers most commonly occur when these defensive mechanisms are disrupted by overlapping processes such as Helicobacter pylori infection and ingestion of NSAIDs.

Gastric ulcers are classified into three types: I, II, and III. The type I are located in the lesser curvature of the stomach and constitute about 60%; those of type II have the same location, but are secondary to a partial obstruction of the pylorus or duodenal bulb (for example, chronic ulcerative duodenal bulb, “cloverleaf”); Type III types are located in the antrum and are the classic prepyloric ulcers (Fig. 28-4). Each of these gastric ulcers have a different pathophysiology.

Type I gastric ulcer presents with marked gastric hypoflux, which increases as the ulcer recedes; for this reason they are designated trophic. Du Plessis demonstrated an increase in bile reflux, and Fisher demonstrated a hypotonia of the pylorus in addition to a decrease in the duodenal anthropyloric pressure gradient. For this reason, bile reflux and the formation of isolecithin occur, which is responsible for the destruction of the defensive barrier and type B gastritis that all type I gastric ulcer carriers have. This chronic gastritis leads to hypochloridia. and hyposecretion typical of this ulcer. Finally, the importance of the crossover of the circular muscle bands of the stomach was demonstrated as another factor of local ischemia and ulcer.

Type II gastric ulcer is due to partial obstruction of the duodenal bulb by a chronic, deformed duodenal ulcer, which secondarily conditions an antral ectasia with delayed gastric emptying and subsequent hypergastrinemia and gastric ulcer of the lesser curvature.

The duodenal ulcer presents a vagal hyperfunction, with increased basal gastric secretion and nocturnal gastric secretion, before a fictitious meal, and increased pancreatic polypeptide and the caliber of the vagal trunks. This hypersecretion decreases by 70% after truncal or superselective vagotomy. There is a larger mass of parietal cells, gastrin-producing G cells, and generally healthy gastric body mucosa. All this leads to 50% to 70% of duodenal ulcers having a greater gastric secretory capacity, with a debit greater than 30 mEq / hour. There is a failure of the duodenal brake due to a decrease in antral somatostatin; There is also a weakening of the duodenal inhibitory mechanisms due to a decrease in the secretin and somatostatin producing cells. of VIP and of all antigastrin hormones. therefore, a characteristic is the almost constant acid pH of the duodenal bulb, especially at night due to an empty stomach and nocturnal gastric hypersecretion. In addition, there is a decrease in the defensive barrier of the duodenum, with loss of cytoprotection, rupture of the duodenal pH gradient, and a drop in duodenal prostaglandins.

Gastric ulcer according to its depth is classified into four types. In type I, the loss of substances affects the superficial epithelium, as a generally acute flat erosion that can heal spontaneously; This depressed lesion can be confused with type II C early gastric cancer. Type II ulcer involves even the submucosa as it crosses the muscularis mucosae; it is shallow and healing easily evolves. The depressed lesion can be confused with type III early gastric cancer. In type III ulcers, the depth reaches the muscularis propria; it is a chronic, torpid ulcer that can heal leaving sequelae. Bormann II and III advanced gastric cancer has these characteristics. 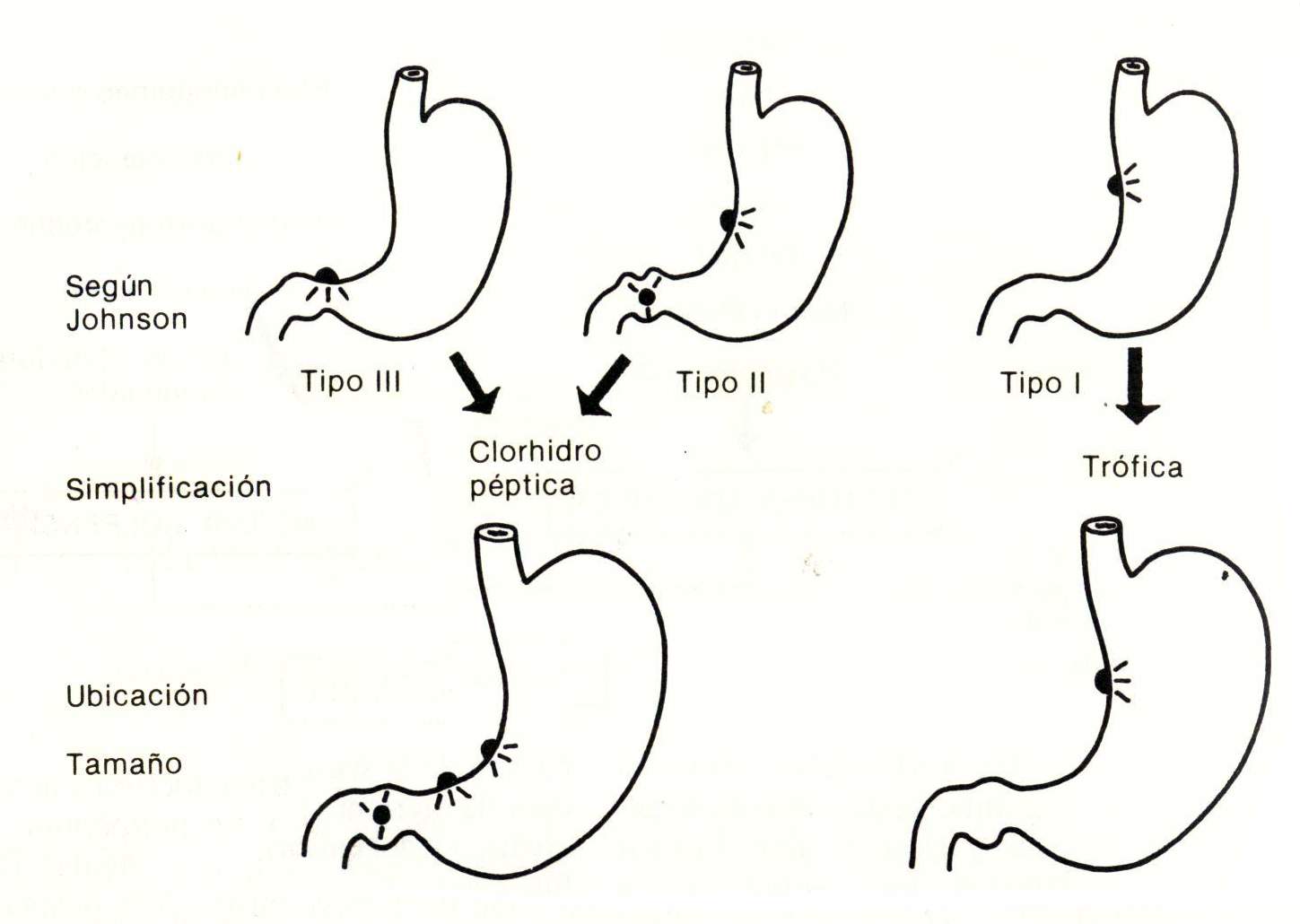 The symptomatology of gastroduodenal ulcer is characterized by the so-called ulcer syndrome, which can be typical or atypical. The typical ulcer syndrome presents epigastric pain, epigastralgia, which appears on an empty stomach, usually two or three hours after ingestion (late postprandial pain), which calms eating with milk, with alkalis, with anticholinergics, with vomiting; It is a daily and hourly pain with a feeling of painful hunger, usually before the main meals and frequently at night. The subject who, while asleep, is awakened by an epigastric pain that calms with ingestion, is generally a gastroduodenal ulcer. Ulcer syndrome is daily, hourly, and periodic. The typical thing is its evolution by "poussées" or periods of activity. It is a chronic disease for life. In atypical ulcer syndrome, pain is located in the right upper quadrant, simulating a cholecystopathy; But it has one characteristic: the pain is relieved by eating and the patient feels good with a full stomach. Other times the left hypochondrium hurts and it is often confused with a syndrome of the splenic angle of the colon, although in the latter the pain relieves with defecation or with the elimination of gases. Ulcerative pain can be expressed even in the umbilical or retrosternal or interscapular region. Other times there is no pain, but there is gastric acidity with a rhythm equal to that of epigastric pain, as an equivalent. The gastric ulcer can present symptoms of the neoplastic syndrome, with anorexia, gastric fullness and thinning, considering the differential diagnosis with a malignant ulcer.

Finally, there are asymptomatic gastroduodenal ulcers, which can be directly related to their complications, such as bleeding, pyloric syndrome and perforation. The physical examination is generally negative.

Routine tests are usually normal. The presence of Helicobacter pylori can be determined noninvasively by IgG serology or by urea breath test after oral urea loading or by endoscopic biopsy by urease testing, histology by a inflammation and the identification of Helicobacter pylori. The gastroduodenal serial radiography with double contrast technique can detect the ulcer lesion both in the curvatures and in the gastric body; It will be possible to verify the degree of elasticity of the gastric wall, and the double contrast may reveal not only the ulcer but eventually areas of stiffness, lacunar images, irregular Carman niches. In a peptic ulcer X-ray, three aspects are considered: 1) identification of an ulcer crater, 2) secondary changes in the stomach or duodenum, and 3) differentiation between a benign ulcer and cancer. the double contrast allows to see well the normal configuration of the gastric folds and at this level the neighborhood in a thin layer will better show a depressed lesion. The duodenal bulb seen in a thin layer will reveal the ulcer niche, and better yet, a deformed duodenal bulb. In any case, radiology never establishes the etiological diagnosis; although there are gastric ulcerative niches, flat type, embedded or with meniscus-bun, which always lead to ulcerated gastric cancer. In contrast, the ulcerative niche of the duodenal bulb is generally benign. Therefore, when faced with a gastric ulcer lesion, there is always the dilemma of its benignity or malignancy.

Fiberoptic endoscopy is a sensitive, specific and safe method for the diagnosis of peptic ulcers that also allows direct inspection and taking a biopsy.

Gastric functional studies such as the histamine test, Histalog, pentagastrin maximal, are applicable only when a subject with a duodenal ulcer will undergo gastric surgery or also the Hollander test and the dummy food test, to ensure that the vagotomized patient does it was or was not complete. Finally, in the intractable duodenal ulcer with repeated recurrent ulcers, even gastrectomized, a Zollinger-Ellison syndrome should be suspected, where the Kay test and in particular the gastrin blood dose will be indicated.