Urinary obstructive syndrome, or obstructive uropathy, is the clinical manifestation or the set of symptoms and signs that are present when there is an obstruction to the flow of urine, in any segment of the urinary tract from the renal pelvis to the urethral meatus.

The kidney, unlike other organs, brings into play compensatory mechanisms when obstruction occurs, such as pyelosinusal, pyelocanalicular, pyelovenous and pyelolymphatic retrograde flow. Said mechanisms, through the reabsorption of urine, decrease intrarenal pressure, which allows glomerular filtration, although decreased, to continue, producing a continuous and dynamic game of pressure increase and balance.

The existence of these compensatory mechanisms has been confirmed by checking the changes in the chemical composition that occur in the urine of the renal pelvis, and the appearance in the blood of substances injected into it, during a complete obstruction. Renal lymphatic volume, normally similar to urine volume, has also been shown to increase in ureteral obstruction. So effective are these mechanisms that intrapelvic pressure (normal, 6-12 mm Hg), greatly increased in the acute state of obstruction (50-70 mm Hg), is markedly reduced and reaches values ​​close to normal when the obstruction it becomes chronic.

There is also a decrease in renal blood flow due to vasoconstriction, which is due to the release of vasoconstrictive prostaglandins that injure the tubules, with a progressive deterioration of all renal functions (concentration, acidification, etc.), except the dilution capacity of urine, which is not disturbed.

The alteration of the balance between the production, reabsorption and excretion of urine leads to a progressive dilation of the renal cavities (hydronephrosis). When the obstruction is significant and prolonged, severe dilation occurs, which, by compression, together with alterations in vascularity, leads to atrophy of the renal parenchyma, with consequent renal failure.

Elevated blood pressure can be observed in obstructive uropathy, which may be due to different mechanisms, such as sodium and water retention, the uremic process, and in rare cases to an increase in renin secretion. In prolonged bilateral ureteral obstruction, it can be observed, in some cases, that, when the patient is unblocked, a postobstructive polyuria occurs, which is due to the elimination of retained urea and the inability to concentrate and reabsorb sodium due to kidney damage.

In the renal pelvis and ureters, when obstructed there is an increase in peristaltic activity, leading at first to muscle hypertrophy. The same happens in the bladder through its contractile activity to produce bladder emptying. Over time, due to muscle hyperactivity and dilation of the urinary tract that accompany obstructive processes, muscle fibers are altered with the appearance of collagen tissue. Myogenic activity deteriorates and muscle atony finally occurs, which can become irreversible, and contributes to gross dilation of the urinary tract in the final stages of obstructive uropathy.

The recovery of renal function and urinary tract peristalsis will be more complete when the degree of obstruction and the duration of the obstruction have been less, and according to the presence or absence of infection.

There are multiple causes of urinary flow obstruction, and they are listed in Table 46-1.

The frequency of obstructive pathology varies in relation to the age of the patient; those of congenital origin are the most frequent in children; those of inflammatory, infectious and lithiasic origin in young adults; and tumor tumors in older patients.

The symptoms and signs of urinary obstruction are related to 1) the anatomical place where it occurs (upper or lower urinary tract), 2) the degree and form of installation (total or partial, acute or chronic), and 3) the existence or absence of urinary infection.

It is important to note that increased diuresis in response to a stimulus due to increased supply and / or action of diuretics, does not rule out the existence of a partial obstruction, which may be present in any segment of the urinary tract.

Upper urinary tract. The obstruction can be asymptomatic and go unnoticed clinically. It can be manifested by pain or discomfort in the lower back, at the level of the costovertebral angle, below the twelfth rib, outside the paravertebral muscles, sometimes accompanied by a nauseous sensation and unrelated to movements. These symptoms can be so vague and nonspecific as to go unnoticed, and obstructive uropathy manifests when it is bilateral due to oliguria or anuria, or with the symptoms and / or laboratory of renal failure. When the obstruction is unilateral and without obvious clinical manifestations, the hydronephrotic kidney may be a finding during a routine physical examination. It appears as an abdominal mass with contact and lumbar balling, which moves with the breath;

When the obstruction occurs in the ureter in an acute form, generally due to a lithiasis, the symptoms are those of the typical renal colic. Pain of sudden onset, colicky type, with periodic exacerbations, which begins in the lumbar region and radiates to the iliac fossa on the same side. During the painful episode, which is accompanied by nausea and sometimes vomiting, the patient constantly changes position and finds no relief, unlike the patient with peritoneal irritation (eg peritonitis), who does not move so as not to exacerbate the pain.

Due to the similar innervation, when the obstruction occurs in the upper ureter, the pain can radiate to the scrotum and testis on the same side, or to the labia majora of a woman. When it is located in the middle ureter, the pain can be referred to the Mc Burney point, which means that sometimes a differential diagnosis with appendicitis or salpingitis must be made.

During renal colic, physical examination may reveal a positive fist-percussion on the affected side, the abdomen may be distended due to a reflex paralytic ileus, and there may be contracture of the abdominal muscles due to odor, but without irritation of the peritoneum to abdominal decompression.

The symptoms in upper urinary tract obstruction can sometimes be completely masked by the symptoms of the extrinsic pathology that gave rise to it (eg: dissecting aortic aneurysm, uterine prolapse, etc.)

Lower urinary tract. When an obstruction occurs, although the symptoms may be minimal or absent, it is generally manifested by voiding disorders, such as effort to initiate or maintain urination, decreased caliber and strength of the voiding stream, two-stage urination, dribbling postvoid, frequency, and nocturia.

In cases where obstructive uropathy is due to bladder dysfunction secondary to lesions in the nervous system, neurological symptoms accompany dysuria (eg, paraplegia).

In an obstructed and infected patient, treatment is problematic and the urinary infection is very difficult to eradicate, until the obstructive problem is solved.

Structural changes of the urinary tract in obstructive uropathy. In the presence of an obstructive process, the renal calyces gradually alter their normal champagne-glass configuration (Fig. 46-1, A); first they flatten (Fig. 46-1, B) and then they dilate and become convex (Fig. 46-1, C).

The renal pelvis is dilated and sometimes becomes large, which is related to its anatomical situation. The extrarenal portion of the pelvis (Fig. 46-2, A) lies outside the renal parenchyma and is grossly dilated, whereas the intrarenal portion, being contained within the parenchyma, is limited in dilation (Fig. 46-2) , B). As the caliches and the pelvis dilate, they compress the renal parenchyma against the capsule and thin it, leading, in severe cases, to the total destruction of the kidney. 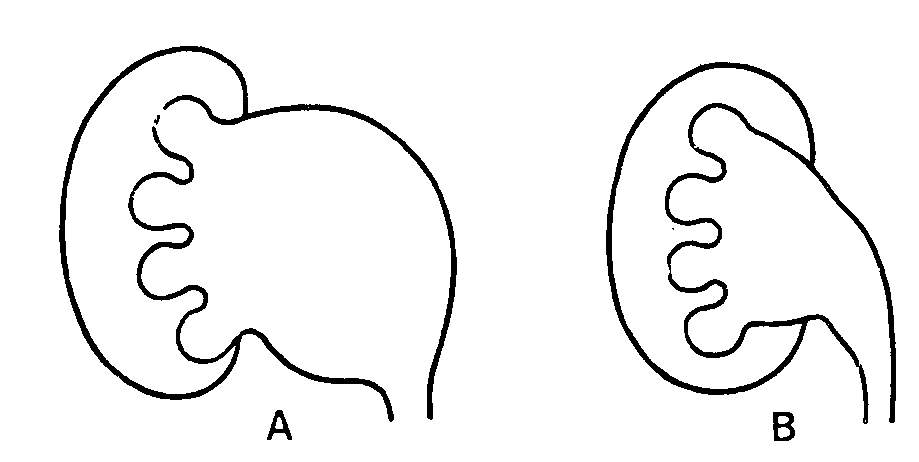 When an obstruction occurs, and due to the helical arrangement of its muscle fibers, the ureter not only dilates, but also elongates and takes on a tortuous appearance, similar to that of an intestinal loop (Fig. 46-3). When the dilation is very important and takes some time, fluoroscopic observation allows us to see how these ureters lose their peristalsis and become atonic. 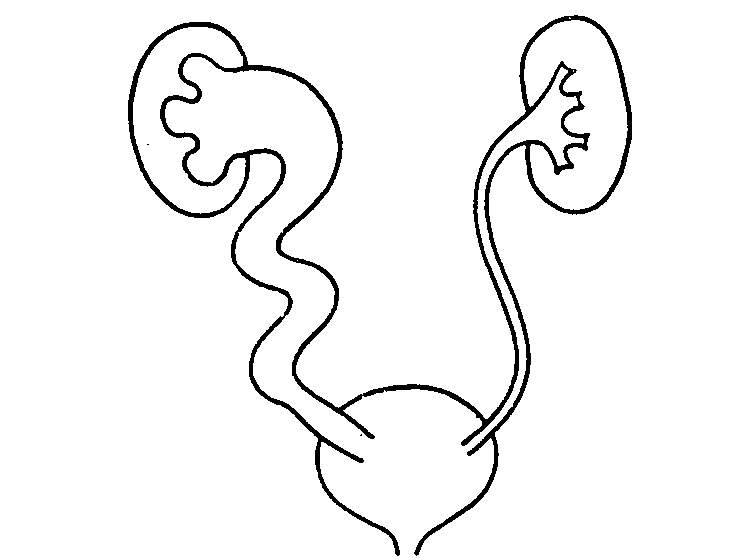 In the bladder, the obstruction produces muscular hypertrophy that gives rise to cells and diverticula (Fig. 46-4), this is translated radiologically by an increase in the thickness of the wall and an irregularity in its contour.

In the urethra, the obstruction produces a proximal dilation with a decrease in caliber at the level of the stricture (Fig. 46-5).

Interrogation. Due to the possibility that the symptoms of obstructive uropathy are vague and nonspecific, the eventuality of a urinary tract obstruction should always be kept in mind, especially if there is another added pathology that may give rise to it.

In relation to the upper urinary tract, one should ask about lumbar discomfort not related to exertion, sometimes accompanied by nauseous sensation, a history of kidney stones or colic, or abdominal pathology that can compromise the ureters, such as surgical interventions or diseases of the intestinal tract, female reproductive system, vascular system, retroperitoneum, etc.

With regard to the lower urinary tract, the existence of obstructive voiding disorders, a history of instrumentation or venereal diseases should be questioned. When the obstruction sets in very slowly, the patient adapts to it and does not report disorders or changes in voiding habits, and only directed questioning can detect symptoms of dysuria. Acute obstruction is manifested by suprapubic pain and discomfort, urgency, and inability to void.

Physical exam. The existence of lumbar (hydronephrosis) and suprapubic (bladder distention) masses should be looked for. In men, a rectal examination should always be performed to rule out the existence of pathological alterations of the prostate gland, a frequent cause of obstruction after 60 years. The genitals will be examined for phimosis or narrowing of the urethral meatus, which are sometimes so severe that they become pinpoint.

In every patient who presents the examination with the clinical manifestations of renal failure, urinary obstruction should be ruled out as a possible etiological cause.

Laboratory. The studies will be oriented to investigate the renal function, and if there is an over-aggregated urinary infection.

Radiology. Imaging methods are very important and will make it possible to confirm or rule out an obstructive process.

A direct renovesical radiography should always be requested, which will allow visualizing the number of kidneys, their size, the existence of radiopaque stones that may compromise the ureter, as well as bone metastases, aneurysmal calcifications, etc.

When there is still functioning parenchyma and there is no history of allergy to iodine, the excretory urogram is the study of choice, since it allows to study the urinary tract in its entirety. If there is an obstruction, there is a delay in the excretion of the contrast substance; In these cases, the plates delayed at 30, 60 or 120 minutes, and even several hours later, should be taken in the urogram, in order to allow the injected substance to reach the radiological density necessary to be visualized and to detect the place where the obstruction is.

At the level of the bladder, the appearance of contrast substance in the postvoid plaque, if it was obtained with the correct technique, reflects the existence of bladder decompensation and its inability to empty its contents in the event of an obstruction.

Finally, when kidney function is severely altered, if there is only one kidney affected, the urogram will not show it; and if the compromise is bilateral and there is a rise in uremia above 80 mg%, there will be no excretion of the contrast substance, so other methods should be used.