Rickets and osteomalacia are calcification disorders. In osteomalacia, the organic bone matrix (newly formed osteoid) is not mineralized normally. In rickets, which affects children, the epiphyseal growth plate is also compromised, with defective cartilage calcification and cartilage thickening and disorganization.

The term osteomalacia refers to the “softness” of the diseased bone, due to the accumulation of non-calcified collagen matrix. In children, whose growing skeleton must support body weight, the characteristic rickety deformations occur. Figure 79-1 schematically shows the major differences between normal, osteoporotic, and osteomalácic bone.

Originally, the two entities in the epigraph were considered a consequence of a lack of vitamin D, but the use of their names has been extended to other metabolic osteopathies that, to a greater or lesser degree, are reminiscent of vitamin D deficiency.

Normally, between the deposition of the newly formed collagen matrix and its mineralization there is a delay of 10 days. The cell

Responsible for the deposit of calcium salts (first, amorphous calcium phosphate, which is later transformed into crystalline hydroxyapatite) is the osteoblast. This process is very orderly and takes place on the osteoformation surfaces as long as they are normal: a) cell function; b) the composition of the collagen matrix and its rate of formation; e) the concentrations of calcium and inorganic phosphate ions in the extracellular fluid; and d) the local pH (approximately 7.6). Furthermore, there should not be an excessive concentration of mineralization inhibitors, such as pyrophosphate and proteoglycans.

Vitamin D present in food and that formed in the skin by the action of ultraviolet rays must undergo two important transformations before exerting their biological effect. The first is 25-hydroxylation in the liver, which transforms it into 25-hydroxyvitamin D or calcidiol. This is then hydroxylated in position 1 by an alpha-hydroxylase existing in the renal tubules, with the formation of 1,25-dihydroxyvitamin D or calcitriol. Also in the kidney, other polar compounds are formed that may be important in the mineralization process, such as 24,25-dihydroxyvitamin D). Calcitriol is the main responsible for the active intestinal absorption of calcium and phosphorus; Furthermore, its action on bone resorption is complementary to that of parathyroid hormone. In his absence, then, serum levels of both mineral ions tend to drop. Hypocalcemia stimulates PTH secretion (secondary hyperparathyroidism); This accelerates bone turnover, with an increase in the bone isoenzyme of circulating alkaline phosphatase, and aggravates phosphataemia by decreasing tubular phosphorus resorption.

An adequate presence of calciferols (vitamin D and its derived compounds) is essential for normal osteoblastic function, although the mechanism that fails in deficiency states is not very clear. The traditional view is that the typically low Ca x P product leads to faulty mineral deposition. Perhaps the genesis of cytoplasmic vesicles in osteoblasts and chondrocytes –which, once extruded, are the first stimulus of mineralization– is impeded. Or the cells lacking produce a defective collagen matrix. Or the transport of phosphorus across the cell membrane is affected. The truth is that there is a functional disorder in osteoblasts that has a histological correlation: these cells have staining abnormalities, with less basophil; its glycogen content increases, while diminishing the rough endoplasmic reticulum. But the main microscopic characteristic of bone is the abundance and thickness of the osteoid bands, which do not take well the brand with tetracycline (in normal subjects who are administered tetracycline before a bone biopsy, the antibiotic is deposited in the "Calcification front" - the junction of the recently mineralized bone with the band of new osteoid - and can be demonstrated by its intense fluorescence). In rickets, the growth cartilage maturation zone shows notable changes: the height of the cell columns increases, with cells packed together and irregularly aligned. The thickness of the epiphyseal plate increases, as does its transverse diameter, which produces the typical “cup” deformity at the end of long bones.

Table 1 shows a classification of rickets and osteomalacia according to their possible causes. As can be seen, the list –although incomplete– is long, and ranges from obvious causes known for half a century, such as nutritional deficiency of vitamin D, to entities whose molecular basis has just been revealed, such as cases in which renal synthesis Calcitriol is not normally carried out by default of 1-alpha-hydroxylase, or others in which the receptors for calcitriol are absent in the effector cells (vitamin resistance).

Skeletal pain is characteristic in affected subjects; it can become intense, and manifests spontaneously or when caused by external compression. There is usually muscle weakness, especially at the roots of the limbs, and hypotonia. Of course, the affected bones can fracture or undergo epiphyseal slipping (epiphysiolysis). Depending on the age of the patient and his stage of development, the bone deformities will appear. Thus, the olympic forehead and the softness of the shell (craniotabes) are typical of congenital rickets. Thickening of the chondrocostal junctions (sometimes recognizable with the naked eye; others, by palpation) with the characteristic "costal rosary" is seen in early childhood. Also in children, widening of the wrists is observed and, in more severe cases, the bending of the long bones of the lower limbs. If the disease is not cured early, dwarfism may remain. Teething disorders can also be observed in children.

Gait can be abnormal: in children, due to deformities of the legs; in adults by the analgesic postures that patients adopt.

In some cases, the hypocalcemia becomes of sufficient magnitude to cause overt tetany, but this is not usual. Chvostek and Trousseau signs must always be sought to reveal latent tetany.

The neurological examination is normal.

The laboratory displays the typical triad of hypocalcemia, hypophosphatemia, and alkaline hyperphosphatasemia, although any combination of these biochemical abnormalities is possible in a given patient. Generally, serum PTH levels are elevated. In specialized laboratories, calcidiol and calcitriol can be dosed, which allows orienting and specifying the etiological diagnosis (Table 2).

The radiological changes in rickets are more striking at the level of the growth plates, which are thickened, widened, and with a certain “ground glass” turbidity in their diaphyseal appearance.

Invevations of the diaphyses are evident. In osteomalacia, a decrease in radiographic density and trabeculation is usually noted, with some thinning of the cortices. In some cases, the appearance is entirely similar to that of osteoporosis. More typical is the presence of translucent areas perpendicular to the surface of the bone and measuring a few millimeters or even several centimeters. They are most common in the femur, in the pelvis, on the outer edge of the shoulder blades, on the fibula, and on the metatarsals. These are known as pseudofractures or Looser's zones (Fig. 2). When there are several in the same individual, they usually have a symmetrical distribution and are called Milkman syndrome. They are due to the accumulation of osteoid and poorly calcified bone,

In summary, when faced with rickets or osteomalacia, it is necessary to obtain a good dietary and drug anamnesis, and ask questions regarding the functioning of the digestive system. The existence of similar cases in other members of the family may lead to a hereditary disorder. It is necessary to do a complete study of renal function including an excretory urogram. Bone biopsy confirms metabolic osteopathy, but does not illustrate the causal mechanism. 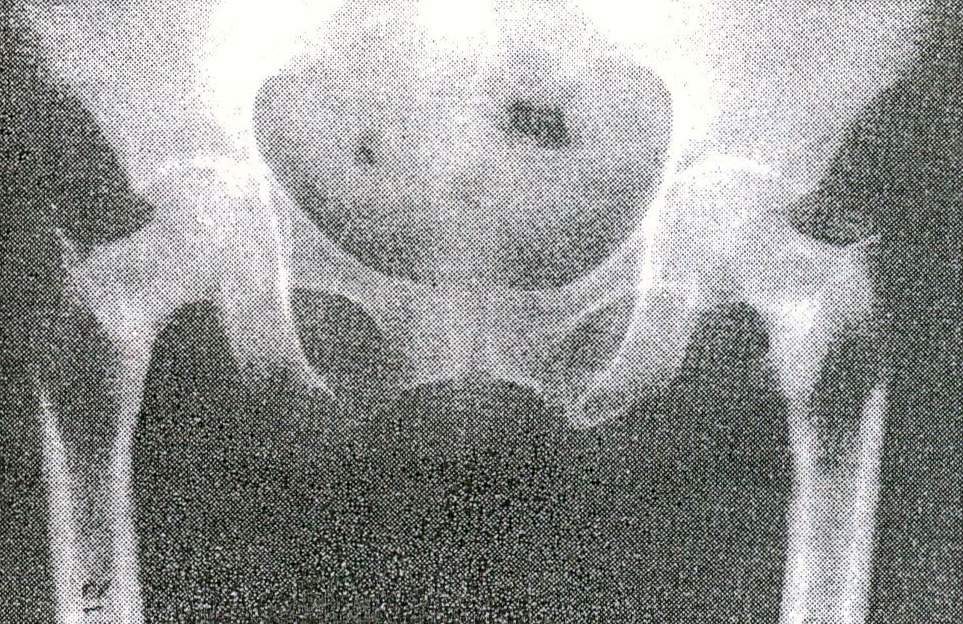