Acromegaly is defined as the clinical picture resulting from the exposure of the tissues of an adult individual to pathologically elevated levels of somatotrophin or growth hormone (GH). When hypersecretion occurs before ossification of the diaphyse-epiphyseal cartilages of long bones, which allows greater longitudinal growth, gigantism occurs, which is very rare.

GH is a 191 amino acid polypeptide secreted by the anterior lobe of the pituitary gland, which stimulates cell growth and mitosis, resulting in a larger size and greater number of cells; From a clinical point of view, this translates -when pathological hypersecretion occurs after puberty and ossification of the diaphysepiphyseal cartilages- into an increase in periosteal bone apposition, with bone widening and deformity, visceromegaly and increased tissue soft.

Under normal conditions, GH production is affected by several physiological factors, which exert their action through two hypothalamic hormones of a polypeptide nature that reach the somatotropes through the hypothalamic-pituitary portal system: a stimulant, the GH-releasing hormone hypothalamic , and another inhibitor, somatostatin. The peptidergic cells that produce both are in turn under the control of higher centers through various neurotransmitters (norepinephrine, dopamine, serotonin). L-dopa, after transformation into dopamine, and the precursors of serotonin, stimulate GH secretion. Potency alpha-adrenergic blockade and beta-adrenergic block decrease the effect of different stimuli of GH secretion. These are numerous and varied. Hypoglycemia, a decrease in free fatty acids and an increase in circulating amino acids stimulate GH release, while hyperglycemia and an increase in free fatty acids inhibit it. Surgical trauma and other stressful situations, as well as the early stages of sleep that coincide with the REM period, are associated with increases in GH.

GH is an anabolic hormone that tends to promote protein synthesis from amino acids, DNA, and RNA. It has a hyperglycemic action due to an increase in peripheral insulin resistance, which determines a hyperinsulinemia that, if it is not enough to compensate the action of GH, is the cause of the appearance of carbohydrate intolerance or frank diabetes in a patient. appreciable number of patients with acromegaly. It also has lipolytic action, producing the hydrolysis of triglycerides with an increase in free fatty acids. In relation to its growth-promoting properties, GH influences the metabolism of various electrolytes, decreasing the urinary elimination of Na, K, Cl and P. Water is retained proportionally to Na.

GH exerts many of its actions, except the hyperglycemic and lipolytic, stimulating the synthesis in the liver and in other tissues of a group of peptides known as somatomedins or insulin-like growth factors.

Although acromegaly is associated with the presence of GH-producing adenomas, there is evidence in these patients of an alteration in the hypothalamic control over GH secretion. Abnormal GH release in response to TRH administration, lack of the nocturnal peak associated with sleep, a paradoxical response (inhibition) to L-dopa, and lack of suppression in response to glucose administration are observed, with eventual appearance of an increase rather than the usual decrease in GH levels. 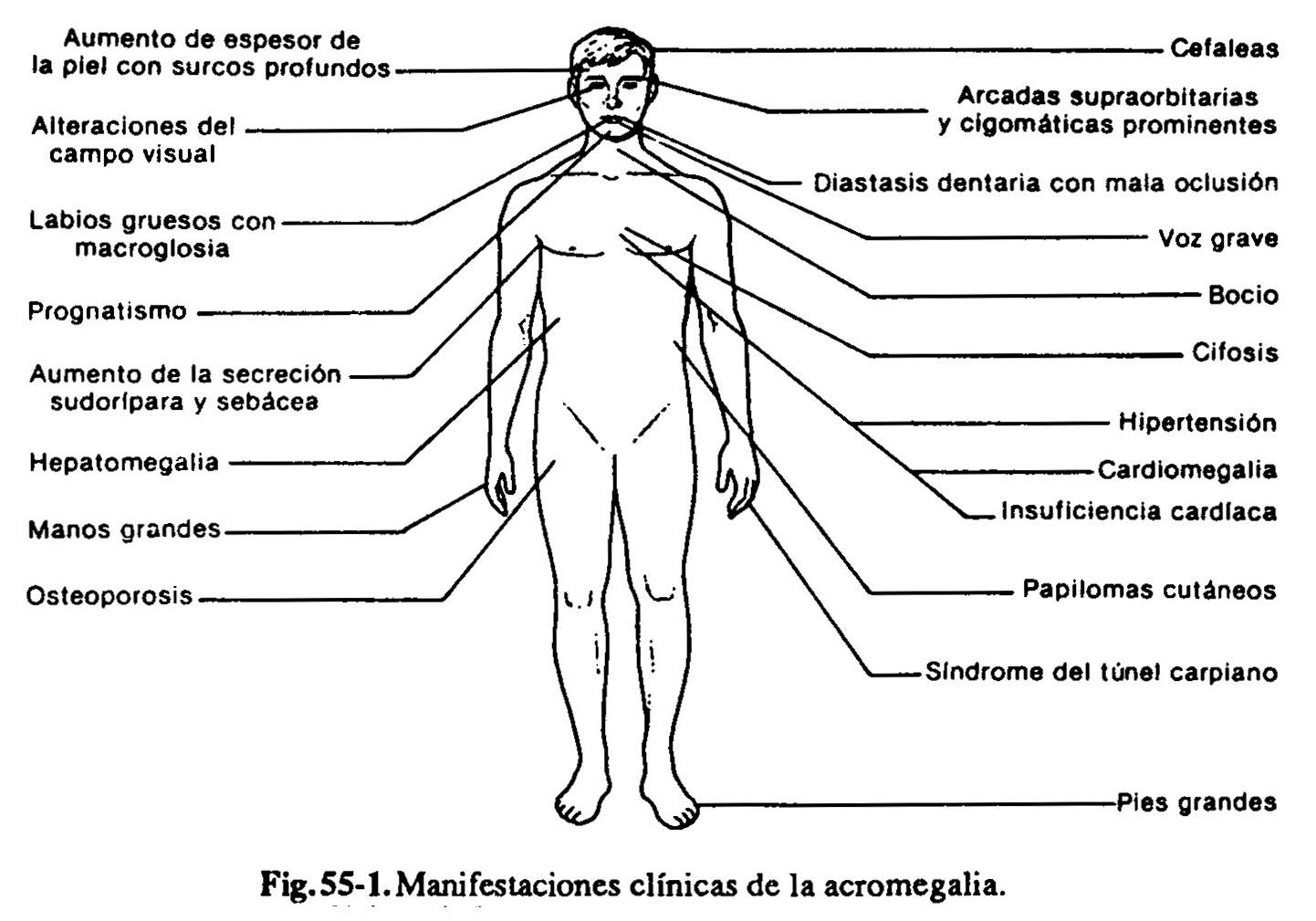 Some cases of acromegaly due to GHRH-producing hypothalamic tumors, as well as ectopic production of GHRH by tumors of the endocrine pancreas and lung carcinoids, have been described; GHRH causes hyperplasia of the pituitary somatotropes in these circumstances.

There are two types of clinical manifestations: those determined by the increased production of GH and the variable alterations of the other anterohypophyseal hormones, on the one hand, and those dependent on the presence of the adenoma itself, on the other.

Almost all organs enlarge (visceromegaly) under chronic GH stimulation. There is usually some increase in the anteroposterior thoracic diameter, reflecting an increase in lung volume (pneumomegaly). One of the most affected organs in this regard is the heart. A large proportion of these patients die from arrhythmias and heart failure, to which GH itself contributes through specific cardiomyopathy, concomitant hypertension, which is very common and of unclear pathogenesis, and carbohydrate intolerance or frank diabetes that develops as a consequence of the diabetogenic action of GH. The same hyperinsulinemia that develops in response to increased peripheral insulin resistance would contribute to the development of coronary atherogenesis.

There may be joint alterations produced by exaggerated bone apposition and / or cartilaginous and synovial thickening, with manifestations of osteoarthritis, pain and limitation of movements. Arthrosic changes in the spine can cause various root compression syndromes. Peripheral nerves may be affected, for example by the development of carpal tunnel syndrome, with compression of the median nerve, and weakness and sensory disturbances in the hands. Initially, prominent muscle development can sometimes be observed, followed by myopathy.

The appearance of asthenia, fatigue, decreased libido and impotence are a combined consequence of excess GH, and lack of LH and FSH; there is myopathy, neuropathy, and varying degrees of hypopituitarism due to damage to the extratumoral pituitary tissue. Oligohypomenorrhea or amenorrhea are due to ovarian failure secondary to gonadotropin deficiency. Galactorrhea is due to the concomitant hypersecretion of prolactin by acidophilic cells other than GH-producing cells.

Occasionally, acromegaly may present as part of the syndrome of multiple endocrine neoplasms type I, associated with tumors of the parathyroid and endocrine pancreas.

Manifestations of pituitary adenoma . Most patients have a demonstrable adenoma at the time of clinical detection of the disease, manifested by headaches and / or visual disturbances.

It comprises two parts: the endocrinological evaluation, aimed at revealing the existence of abnormal GH hypersecretion, and the neuroradiological study, which demonstrates the existence and extent of the pituitary adenoma.

Baseline somatotrophin . Considering that GH, like other pituitary hormones, is secreted episodically, it is convenient to obtain three or four plasma samples for its determination, with intervals of 30 to 60 minutes in the course of a day, or a daily sample during several consecutive days, to have an appreciation of its mean plasma concentration. It is normally below 10 ng / ml; in a patient with acromegaly, it can range from this figure to 500 ng / ml, although it generally remains below 100 ng.

Oral glucose tolerance test . In normal individuals there is an inverse relationship between blood glucose and GH levels. Thus, in the course of an oral glucose tolerance test, administering 75 grams of glucose dissolved in 350 ml of water, and obtaining blood samples before and at 60 and 120 minutes after ingestion, it is observed that the plasma concentrations of the hormone they descend to very low levels, sometimes not detectable.

When the study is carried out in acromegalic patients, approximately 60% show no variation whatsoever, 25% show a partial decrease and 15% show a paradoxical increase. Qualitatively abnormal responses can occur in uremic patients, with liver failure, depression, anorexia nervosa, and disseminated metastatic cancer.

TRH test . Approximately 70% of acromegalic patients have an increase in GH in response to the administration of HRT, which is not observed in normal individuals.

L-dopa test. In contrast to the increase that occurs in normals, acromegalic patients show a decrease in GH in response to L-dopa or other dopamine agonists.

Determination of IGF-I . In the absence of intercurrent serious diseases or severe malnutrition, serum IGF-I levels are practically always elevated in patients with acromegaly. Likewise, the concentrations of the IGF-binding protein (IGFBP-3) are increased.

Other studies . Radiographic study of the hands and feet is not necessary for diagnosis, but it provides useful information on bone abnormalities and soft tissue thickening.

Computed axial tomography and magnetic resonance imaging . They make it possible to determine the existence of adenomas larger than 3 mm and the degree of suprasellar extension, in the cavernous sinus or inside the sphenoid sinus.

Campimetry . It detects visual field alterations, which express compression of the optic pathway by the adenoma.