Hypopituitarism is defined as the condition resulting from the inability of the anterior pituitary to maintain adequate hormonal secretion for the body's needs. 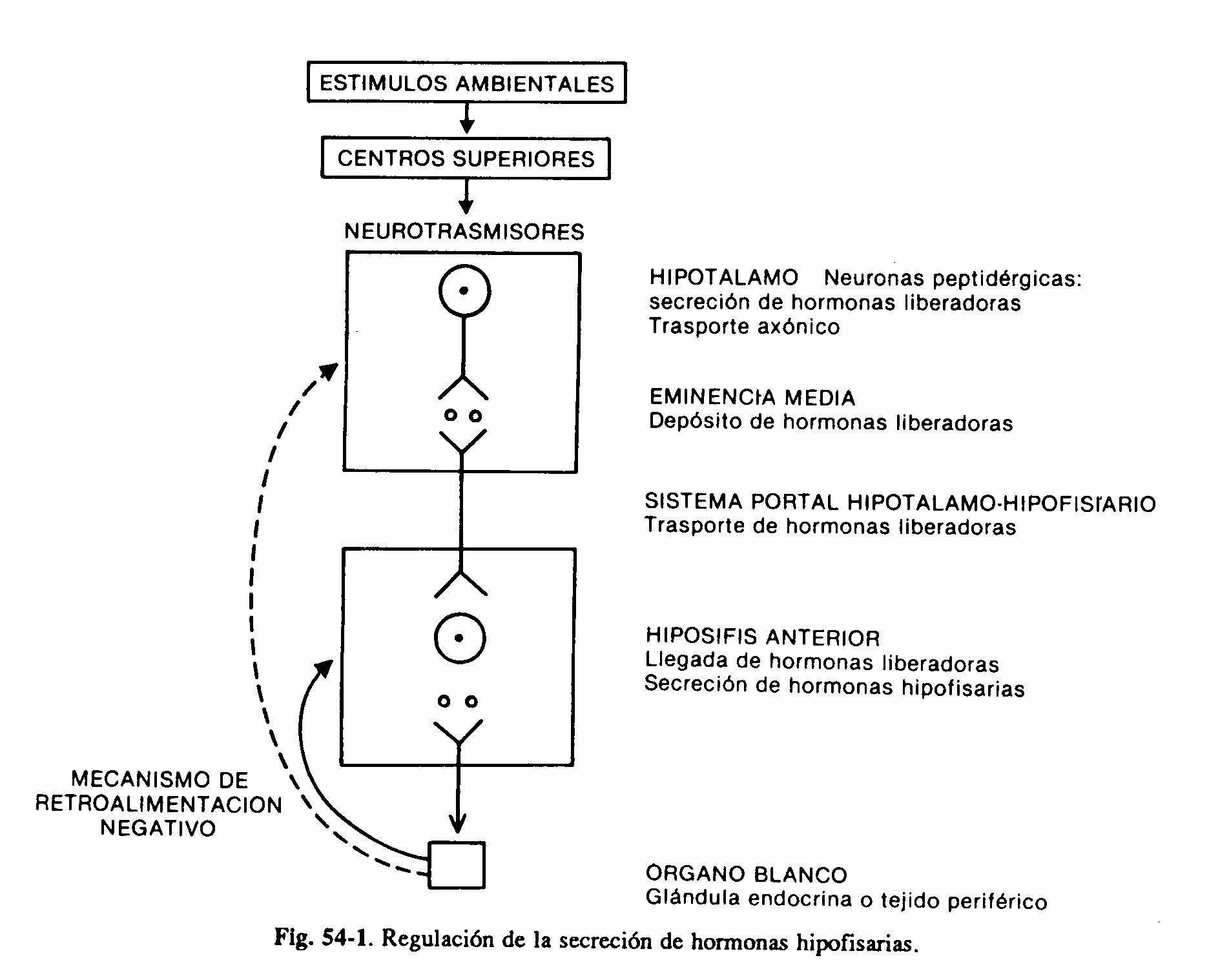 The anterior pituitary produces six clinically important hormones: luteinizing (LH) and follicle-stimulating (FSH) hormones, thyrotrophin (TSH), prolactin (PRL), somatotrophin or growth hormone (GH), and adrenocorticotrophin (ACTH). The first three are glycoproteins made up of two parts, the alpha and beta subunits; the alpha sub-unit is similar in all of them, while the beta gives each one its specificity of action. GH and PRL are peptides made up of a single chain of amino acids with intramolecular disulfide bonds. ACTH is a 39 amino acid peptide, derived from a higher molecular weight glycoprotein prohormone, which also gives rise to lipotropins, endorphins and melanocyto-stimulating hormone (proopiomelanocortin).

Gonadal steroids exert a positive or negative feedback effect on the pituitary response to GnRH in women, which is dependent on plasma estrogen concentrations. In hypogonadal, neutered or postmenopausal women they exert negative feedback. In contrast, in eugonatal women the response of LH and FSH to GnRH is increased by high levels of estrogens. In the male, testosterone suppresses LH synthesis, while testosterone and inhibin produced by Sertoli cells suppress FSH.

PRL secretion is stimulated under normal conditions by stress, exercise, hypoglycemia, hyperestrogenism and stimulation of the nipple and breast, a mechanism that requires the integrity of the neural pathway from the breast to the CNS.

Each of the pituitary trophins plays a fundamental role in maintaining the anatomical and functional integrity of the corresponding peripheral gland. TSH stimulates the different metabolic steps that lead to the synthesis and release of T4 and T3. ACTH maintains the structure and functionalism of the reticular and fascicular areas of the adrenals.

Gonadotropins stimulate gametogenesis and the synthesis of sex steroids. The deficit of each one of them translates into a picture of hypofunction of the respective target organ. The only clearly established role for PRL in humans is related to lactation, and its absence results in a lack of milk secretion (agalactia). GH exerts a series of metabolic actions (protein anabolism, lipolysis, increased peripheral resistance to insulin with a tendency to increase blood glucose) and stimulates cell growth and multiplication. These actions, except their effect on lipid and hydrocarbon metabolism, are mediated by peptides produced in the liver and other tissues, which are called somatomedins. Somatomedins or insulin-like growth factors (IGF-I and II) are produced under the control of GH and have a growth-promoting action on a wide variety of tissues, mainly cartilage and bone. They also exert an inhibitory effect on GH secretion through a negative feedback mechanism on the hypothalamus and pituitary. Its absence fundamentally determines a marked decrease in growth speed.

A wide range of pathological processes can be the cause of pituitary insufficiency, and the most frequent etiologies are tumor (adenomas), vascular and idiopathic. Pituitary tumors, such as chromophobic or parasellar adenomas, such as craniopharyngiomas, more common in childhood, can produce hypopituitarism. In general, and for unclear reasons, the secretory capacity of GH and gonadotropins is the first to be affected in the presence of pituitary adenomas (60 to 80%), whereas the clinical manifestations of TSH and ACTH deficiency are observed in only 15 to 30%. In fact, there may be a marked decrease in the pituitary mass with preservation of normal function.

Functioning pituitary adenomas can influence the hormone production of the extratumoral pituitary by mechanisms other than direct compression or destruction. The inhibition of gonadotropin secretion due to the effect of hyperprolactinemia, and the suppression to varying degrees of gonadotropins, GH, PRL and TSH by an excess of cortisol is known.

Although breast and bronchogenic tumors are the ones that most commonly metastasize to the pituitary, it is rare that they produce an anterohypophyseal functional deficiency. Even though various infiltrative processes can directly affect the gland, conditions such as histiocytosis X and sarcoidosis produce hypothalamic alterations that cause a secondary pituitary deficit.

External irradiation can be the cause of hypopituitarism, usually partial, likely to appear up to ten years after receiving ionizing radiation, and attributable to a direct action on the cells or to vasculitis of the hypothalamic-pituitary portal system. Hemochromatosis and hemosiderosis can affect the pituitary directly.

One of the causes of the female sex is postpartum ischemic necrosis (Sheehan syndrome). It occurs in women who suffered hemorrhage, sepsis and shock after delivery, which produces ischemia and necrosis, attributable to the circumstance that the gland, having increased in size during pregnancy due to lactotropic hyperplasia, and lacking direct blood flow is particularly sensitive to the decrease in vascular flow that occurs under these circumstances.

There are isolated deficiencies of some hormones, determined by a congenital lack of the corresponding releasing hormones. The most frequent are isolated GH deficiency, the cause of a marked stature deficit, and gonadotropin deficiency, which produces hypogonadotrophic hypogonadism that, associated with anosmia or hyposmia due to hypoplasia of the olfactory bulb, determines Kallmann syndrome. Table 59-1 summarizes the etiologies of hypopituitarism.

The clinical manifestations depend on the hormones affected. In adults, the most frequent symptomatology corresponds to hypogonadism secondary to gonadotropin deficiency. Growth delay due to lack of somatotropin is the most common reason for consultation in children. Adults with panhypopituitarism have a characteristic appearance (Fig. 59-3): absence of pubic and axillary hair, atrophy of the breasts and genitals, pale skin and areolas, skin with fine lines, and poor muscle development. Male patients do not present the characteristic temporary recession in hair implantation. They may have an infiltrated appearance due to secondary hypothyroidism.

Somatotrophin (GH) deficiency . It causes delayed growth and bone age with preservation of body proportions. There is a greater amount of adipose tissue in the trunk, due to lack of the lipolytic action of GH. The voice tends to be high-pitched due to less laryngeal development. Hypoglycemia is more common in newborns with congenital GH deficiency. Asthenia, depression, and weight gain are common in adults with hyposomatotrophism.

Gonadotropin deficiency. Hypogonadism is the most common endocrine manifestation in adult pituitary deficiency. Gonadotropin deficiency that appears before pubertal age is characterized by the lack of development of primary and secondary sexual characteristics, with consequent infertility. Males do not develop a beard, a temporary recession in hair implantation, a change in voice characteristics or an increase in testicular and penis size, as well as the accessory sex glands (prostate and seminal vesicles). Girls have primary amenorrhea and lack of breast development. Both sexes may have scant or absent pubic and axillary hair, even though in the female sex its presence depends mainly on adrenal androgens.

In women of reproductive age, hypogonadotrophism is manifested by oligohypomenorrhea or secondary amenorrhea, with uterine and mammary atrophy and a decrease in the cornification of vaginal cells due to the absence of estrogens. In the adult male, testicular atrophy is accompanied by a decrease in libido, potency, muscle tone, and growth of beard and hair.

TSH deficiency . The picture of hypothyroidism secondary to TSH deficiency is similar to the primary one, but often less severe. Drowsiness and asthenia are common. The skin, in addition to being infiltrated and pale, presents, mainly on the face, fine wrinkles attributable to the concomitant gonadal deficit

ACTH deficiency . Contributes to pale skin and nipples, as well as asthenia. It rarely presents as acute adrenal insufficiency, except in stressful situations. This is partly due to the conservation of aldosterone secretion by the zona glomerularis of the adrenal cortex, which is minimally dependent on ACTH.

Prolactin deficiency . It is manifested by postpartum agalactia. In this sense, it is also characteristic the history of patients with Sheehan's syndrome who, following a delivery with hemorrhage and shock, present agalactia, amenorrhea, genital and breast atrophy, loss of pubic and axillary hair, paleness, infiltrated appearance and Asthenia If there is a pituitary adenoma, the symptoms and signs of a tumor mass may predominate over the general endocrine manifestations.

It includes neuroradiological and endocrine evaluation.

Neuroradiological evaluation . It attempts to define the presence or absence of a tumor mass, its extension beyond the limits of the sella turcica, and the involvement of the optic chiasm and other neighboring structures. It is detailed in Chapter 53 (Pituitary Tumor Syndrome).

Endocrine evaluation . Its purpose is to determine the functional reserve of the gland.

Somatotrophin . Normal concentrations are generally below 10 ng / ml, as measured by radioimmunoassay. Considering that a normal person may at any given time have values ​​that overlap with those of a hypopituitary patient, it is essential to resort to a stimulus test to evaluate the somatotrophic response, producing substantial increases in healthy individuals, while in hypopituitaries it is not. occur or are minimal.

Insulin hypoglycemia test. It is one of the best and is of choice in the study of patients with short stature in whom hyposomatotrophism is suspected. It is based on the inverse relationship between blood glucose and somatotrophin levels. A decrease in available glucose at the level of the hypothalamic nuclei that regulates GH secretion determines its release, which results in an increase in the circulating energy substrate, through the lipolytic action of the hormone and the increase in peripheral resistance to the action of insulin. Venous plasma samples for blood glucose and somatotrophin are obtained before and 30, 60, and 90 minutes after bolus IV administration of 0.1 U of standard insulin per kilogram of body weight. Under normal circumstances, and when blood glucose drops by at least half of baseline values,

L-DOPA test . GH is quantified before and at 60 and 90 minutes after the administration of 500 mg of L-DOPA. In children proportionally smaller amounts are given. An increase that exceeds 100% or exceeds 10 ng / ml is usually observed. 25% of healthy individuals have negative responses.

LH and FSH . A single determination of LH and FSH allows to differentiate a primary hypogonadism, due to damage to the gonad, from a secondary one, due to hypothalamic pituitary alteration. The existence of low testosterone or estradiol levels with high LH and FSH points to the first diagnosis; on the contrary, the lack of elevation of gonadotropins in similar circumstances leads to the second possibility. Baseline LH and FSH concentrations in normal men and women of reproductive age during the follicular and luteal phases of the cycle are below 15 mIU / ml. During the ovulatory peak and after menopause, the numbers increase 2 to 4 times.

GnRH test . It is used to assess the pituitary gonadotropin reserve. Plasma samples are obtained before and 30 and 60 minutes after the 50 ug bolus EV injection. gonadotropin-releasing hormone hypothalamic. Typically a peak occurs within 30 minutes, with an increase of at least 100% for LH and somewhat less for FSH.

TSH . As with gonadotropins, a single TSH determination allows one to distinguish a primary hypothyroidism due to injury to the thyroid gland from a secondary one due to a pituitary alteration. A low T4 and T3 with elevated HRT confirms the first diagnosis, while a lack of increased TSH in the same conditions indicates a pituitary lesion. Normal TSH concentrations range from 0.5 to 4.5 uU / ml.

HRT test . TSH is quantified before and 20 minutes after the 200 ug EV administration. of TSH-releasing hypothalamic hormone, which allows determining the pituitary reserve of it. The minimum increase is 8 uU / ml, reaching values ​​between 12 and 25 uU / ml.

Prolactin dosage . Prolactin determination is essential in the endocrine evaluation of hypopituitarism, since its increase is common in pituitary adenomas (60-65%) and in hypothalamic alterations due to interference with the tonic inhibition of its secretion. Normally, concentrations are less than 25 ng / ml in women and 20 ng / ml in men, in samples obtained between 8 and 10 hours.

ACTH dosage . Plasma ACTH normally has a circadian rhythm, with figures of 50 to 80 picograms / ml in the morning hours and 10 to 30 picograms / ml in the afternoon. Insulin hypoglycemia is probably the most sensitive test for evaluating the hypothalamic-pituitary-adrenal axis. Its usefulness increases since the GH and prolactin reserve can be established simultaneously. Plasma cortisol is determined as an evaluation parameter before and 30 and 60 minutes after the IV administration of regular insulin. Under normal conditions there is an increase of at least 7 ng / dl, and it must exceed 18 ng / dl.