Abnormal findings on examination of the eyes

The alterations of the eyebrows, the presence of exophthalmos, anomalies of the eyelids, the lacrimal apparatus, the conjunctivae, the cornea, the lens and the iris, the pupils should be described; motility and ocular reflexes, visual acuity, and fundus should be explored.

The last four aspects are covered in the neurological examination chapter.

Cejas . They may be absent congenitally or due to cultural and / or religious customs.

On other occasions, the outer part or tail of the eyebrows is missing, as in hypothyroid, diabetic, syphilitic or leprous patients, and it can also be observed in aging. Other times seborrheic scaling is found.

Exophthalmos . It is the protrusion of the eyeballs (Figure 19-1) that can be unilateral or bilateral.

If it is unilateral, the most common causes are retroocular, primary or metastatic tumors (the most frequent metastases are those of breast cancer). Sometimes an accumulation of fatty tissue occurs that leads to the protrusion of the eyeball. 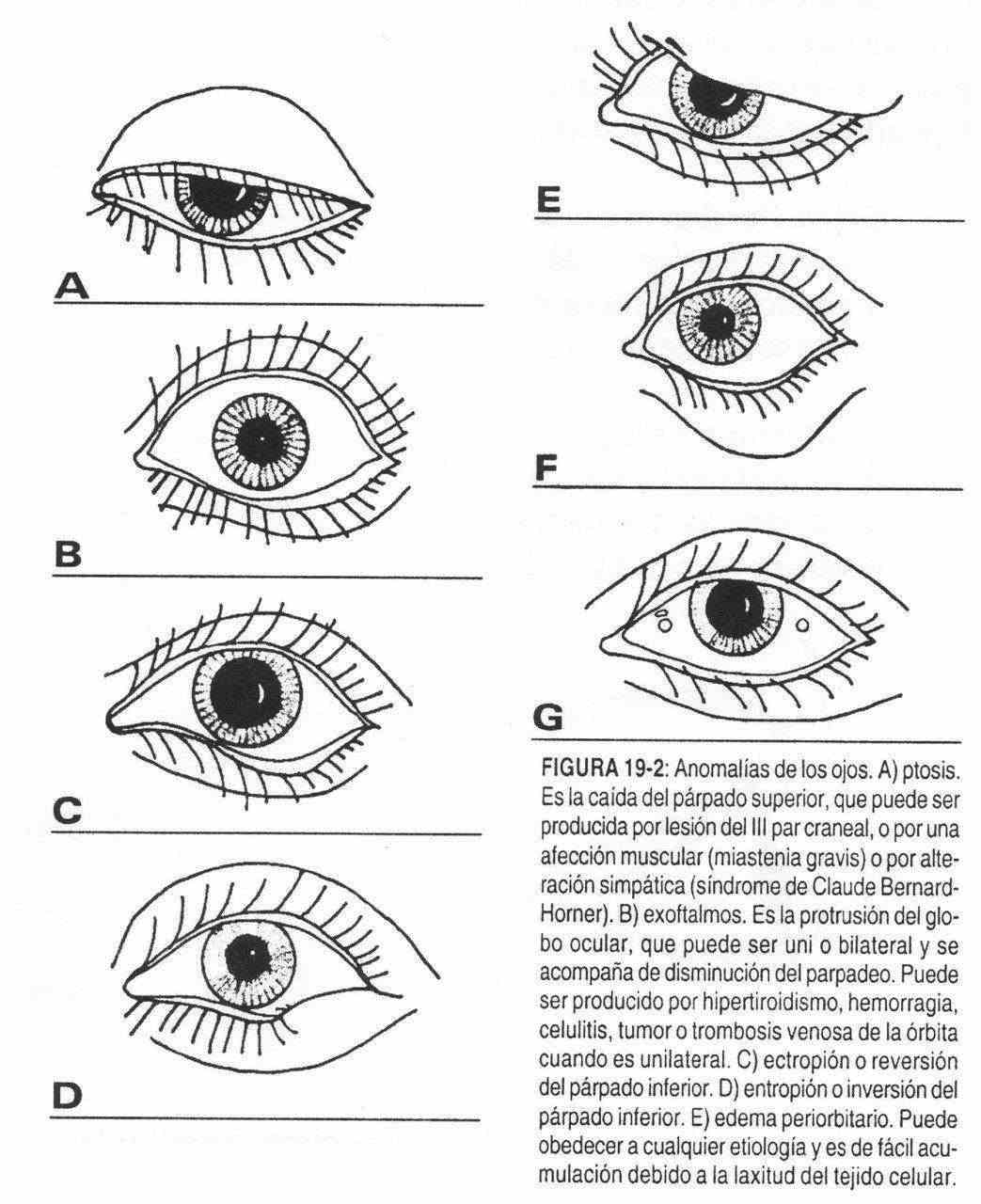 Graves-Basedow disease. The exophthalmos can be unilateral, although more frequently it is bilateral, and gives the face an appearance of fear or terror. Graves-Basedow disease may not be associated with exophthalmia, producing eyelid retraction (a sign of eyelid retraction) that can manifest itself by asking the patient to follow the examiner's finger up and down; in these circumstances, the supracorneal sclera will become evident, which should not normally be observed.

There may also be a lack of flickering. These signs are due to sympathetic overstimulation, unlike exophthalmia and its manifestations, which are produced by the infiltrative process that characterizes hyperthyroid syndrome. Exophthalmia may be accompanied by conjunctival chemosis or injection, periorbital edema, corneal ulcerations, and ocular motility paralysis. If the evolution is rapid, we speak of malignant exophthalmos.

Eyelids . The eyelids may be altered in their shape, color, size, by added lesions or by disorders in their motility.

The shape may be modified by inward eyelid inversion (entropion), with irritation of the conjunctiva and cornea.

When it is inverted outwards, it is accompanied by lacrimation due to an alteration in the drainage of the tears and is called ectropion. Both are frequent in the elderly. Sometimes the inner corner of the eye is blurred by the existence of a vertical or epicanthus third eyelid. It is seen in Mongolism or Down syndrome. 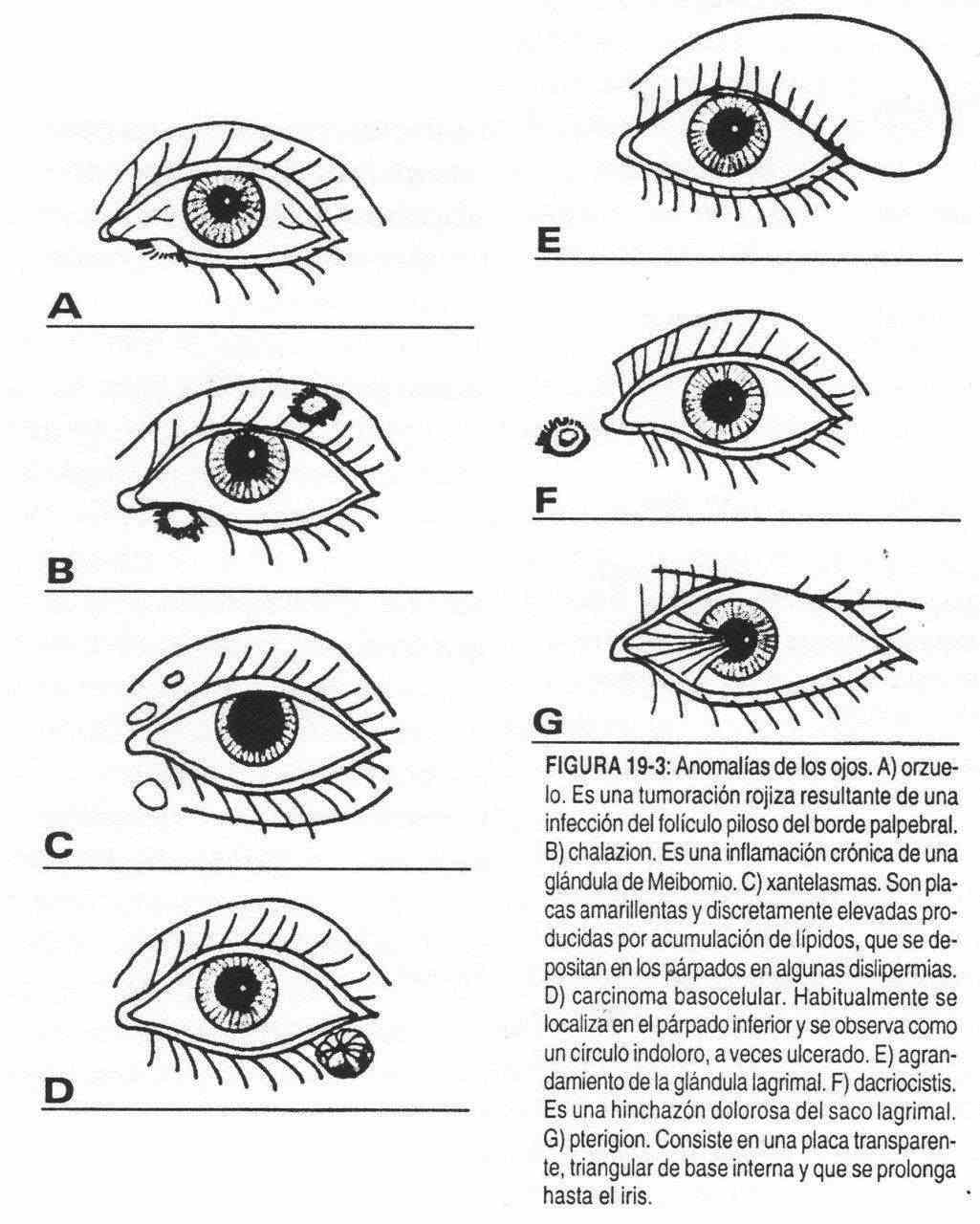 Due to the laxity of the tissues, traumas in the ocular area are accompanied by blood accumulations, constituting the eye "in compote" which, as hemoglobin is metabolized, changes color, from purplish to yellowish-green. Dark circles, or dark coloration of the eyelid groove, usually denote fatigue; they lack pathological significance.

The size of the eyelids can be increased by edema or fatty infiltration, which accumulates easily due to the laxity of the tissues. Edema can be of local or general cause (hypothyroidism, nephrotic syndrome). Fat accumulates more frequently on the lower eyelid, producing "pockets of fat."

As for the added lesions, the eyelids can be the seat of different pathologies. The lipid deposits, or xanthelasmas, appear as circumscribed yellowish plaques and are generally associated with familial hypercholesterolemia. Chronic and painless inflammation, nodular in shape, located in a normal eyelid at the level of the meibomian gland, is called chalazion.

You can suffer from acute inflammatory processes.

A stye is an infection of a hair follicle on the eyelid margin, which is initially seen as a 5 mm tumor with a reddish color. Blepharitis is inflammation of the lid margin.

The eyelid can also be the seat of tumors.

Conjunctiva and cornea . The pinguecula is a yellowish nodule of the ocular conjunctiva, close to the cornea, or far from it. If it extends from the cornea to the inner corner of the eye, it is called a pterygium. Occasionally, blue sclera can be seen as a feature of osteogenesis imperfecta. The senile arch or corneal arch is observed as a peripheral circle of the cornea, yellowish white in color; which is associated with dyslipidemia II and III and with senility.

In Wilson's disease, or hepatolenticular degeneration, a gold-brown or green ring called Kayser-Fleischer may be seen.

Corneal scars are caused by old inflammatory corneal injuries or trauma. Keratoconus, in turn, is a congenital condition in which the cornea is cone-shaped.

In keratoconjunctivitis sicca that accompanies Sjógren's syndrome, a dull, desiccated cornea is observed with signs of conjunctival irritation, disorders caused by the lack of normal lubrication of the lacrimal apparatus. Corneal ulcers are erosions of the cornea, of traumatic or infectious cause, that produce pain, a sensation of a foreign body at the ocular level and tearing.

They correspond to a shedding of the epithelium, and to observe them the use of a slit lamp is necessary.

In the bulbar conjunctiva it is also possible to observe pinpoint hemorrhages that are converging.

They are produced by enterovirus 70 and can occur in epidemics constituting acute hemorrhagic conjunctivitis. Sometimes it is accompanied by radiculomyelitis.

Other times, round hemorrhages are found, with a pale center, as can occur in bacterial endocarditis.

Lens and iris . Its alterations are described together with the second cranial nerve.

Glaucoma, acute uveitis, acute conjunctivitis, blepharitis, and subconjunctival hemorrhage must be taken into account in the differential diagnosis of red eye. Table 19-1 lists the highlights of each process.