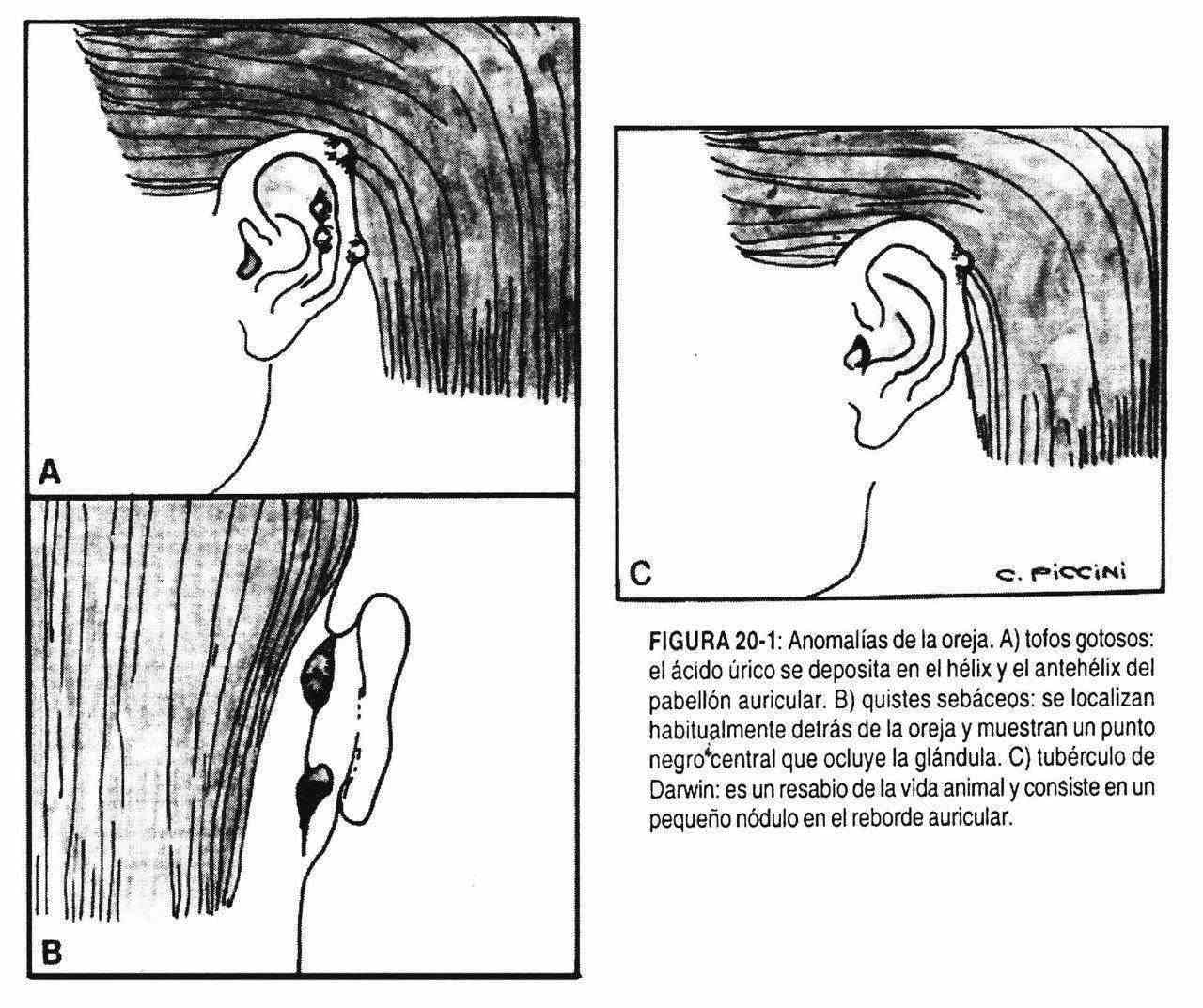 It begins by observing the shape and color, the presence of secretions, tumors, and then an otoscopic examination is carried out.

Ear pain is a reason for consultation, and can be a symptom of ear disease or the first indication of a condition of the jaw and / or the temporo-mandibular joint.

Some patients insert sharp objects into the ear canal, attempting to remove the wax, thereby damaging the eardrum. Children may present hearing loss, due to frequent infections, and purulent secretions, consecutive to the introduction of foreign bodies in the external auditory canal. Wax or cerumen, when it is black, is characteristic of alkaptonuria.

Alterations in the shape of the ear can be observed in some systemic diseases with genitourinary malformations, kidney diseases and associated with mental retardation. The boxers' ears are deformed in such a way that they are called cauliflower ears; this deformity is due to repeated traumatic or infectious hemorrhages between the cartilage and the perichondrium, with consequent fibrosis and loss of cartilage. Looped ears are those that are separated from the mastoid region and have no pathological significance.

Macrotia (large ear), microtia (small ear), and poliotia (several small ears) may lack pathological significance, although they are sometimes accompanied by other malformations in the inner ear. In dyslipidemia, a horizontal line can be seen across the earlobe. In gout, in turn, it is not uncommon to find uric acid crystal deposits in the helix or antihelix (Figure 20-1, A) of the pinna, and in the retroauricular sulcus. Also, calcium or pigment deposits are seen in some metabolic diseases.

The ear and external auditory canal can present furunculosis and acute or chronic external otitis, with or without rupture of the tympanic membrane; the patient has abrasions or eczema of the walls of the ear canal, with pain, swelling, itching, and decreased hearing. 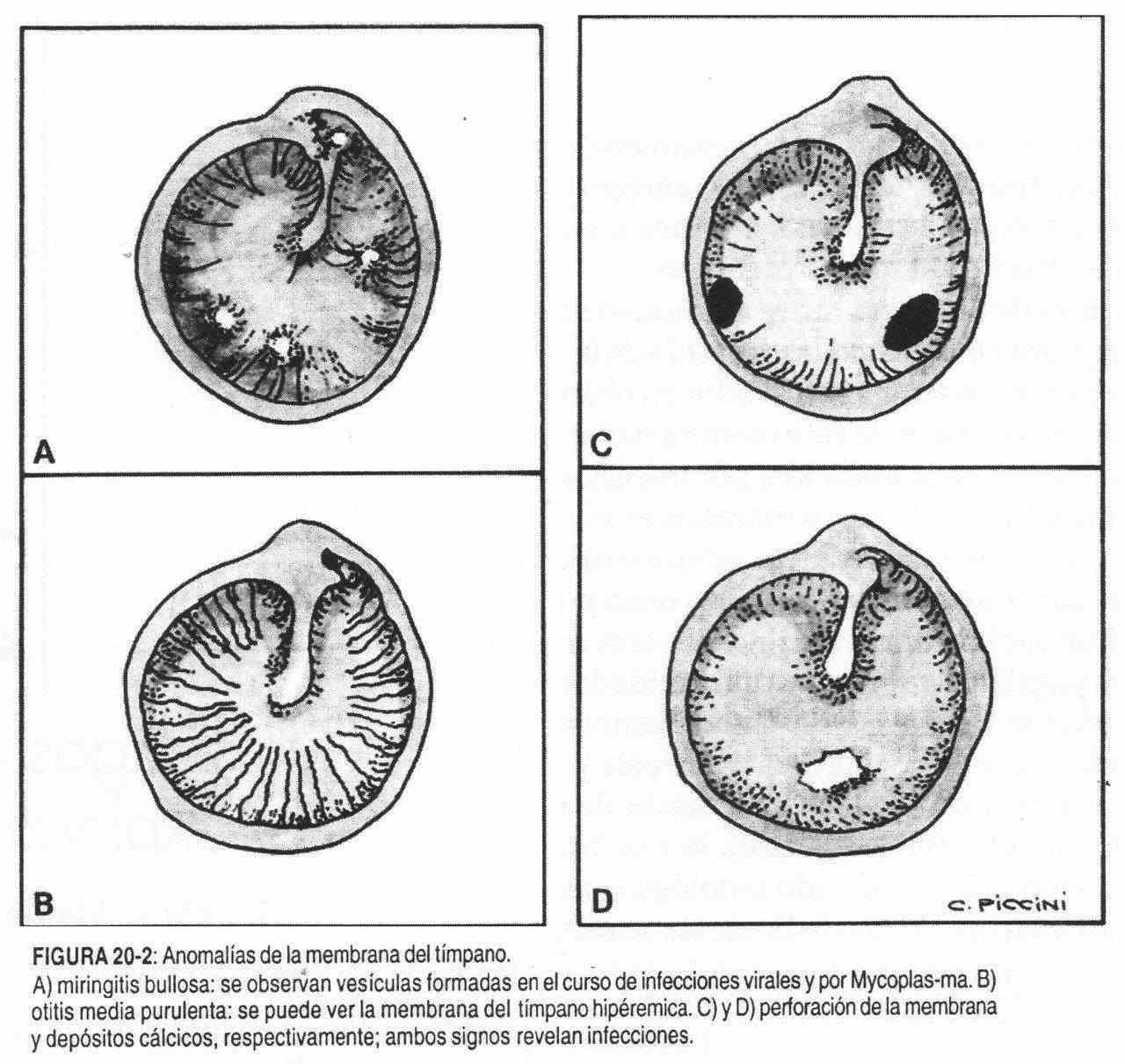 In rare cases, the pinna and / or external auditory canal are missing, and are replaced by a rim that limits the canal orifice. Due to the different embryological origin of the outer, middle, and inner ears, these patients have preserved hearing in their bony part.

The ear can be the seat of benign tumors, such as sebaceous cysts, which are usually retroauricular (Figure 20-1, B) and show a central black dot, which occludes the gland; keloid adenomas and scars are more common in blacks and in areas where rings are placed, and fibroids can also be found. Other times the tumors are malignant; the most frequent are epitheliomas, although sarcomas also develop. Pre and posauricular lymphadenopathy is sometimes palpable.

Darwin's tubercle (Figure 20-1, C) is an aftertaste of animal ear, seen as a small nodule at the top of the atrial ridge; lacks pathological meaning. Other times, a small, painful nodule is found on the helix that can be mistaken for a tophus or skin cancer. It is the so-called chondrodermatitis of the helix, more common in man.

The mastoid region should be inspected, to which infections can spread, erasing the retroauricular groove and causing great pain when compressing this region.

Anterior palpation of the external auditory canal and tragus for pain, which may be the only sign of middle ear disease, is important.

The finding of clear blood in the external auditory canal following head trauma is a sign of a skull base fracture.

Otoscopic examination . Non-painful nodular swellings are sometimes observed that make otoscopic observation difficult and suggest the presence of osteomas. Acute otitis externa is accompanied by swelling, pain, and narrowing and redness of the canal.

Membrane of the eardrum . It can present alterations in its shape and color, loss of reflection to light, and sometimes perforations. Sometimes fluid levels are seen through in the middle ear.

The membrane may be retracted when the hammer appears shorter and horizontal, which occurs due to air reabsorption in the middle ear due to occlusion of the Eustachian tube.

There may be a decrease or absence of the cone of light. In serous otitis media, an air-fluid level is observed, underneath there is an amber-colored liquid or waxy bubbles produced by a viral infection or by blockage of the Eustachian tube, with serous otitis.

Bullous myringitis (Figure 20-2, A) is characteristic of Mycoplasma pneumoniae infections and is manifested by vesicles that form on the tympanic membrane and are found in this disease and in viral diseases.

In acute purulent otitis media (Figure 20-2, B) the vessels are hyperemic throughout the entire membrane, unlike those dilated and isolated vessels that are usually seen at the level of the hammer handle. The membrane then appears bulging, and can subsequently be perforated.

Old perforations are seen centrally or marginally (Figure 20-2, C), and scars and calcium deposits may also be found as signs of past infections (Figure 20-2, D).

Hearing . By varying the intensity of the voice, the patient's hearing capacity is evaluated.