Abnormal findings on examination of the nose and sinuses

The nose may present alterations in its color and shape; tenderness may be found on palpation and discharge may be observed.

Color . In the perimeter of the nostrils it is possible to observe a bluish coloration in cyanosis.

Other times the nose is reddened as in rosacea, lupus erythematosus, infectious processes or alcoholism. In systemic lupus erythematosus, erythematous squamous lesions are found, which take the cheeks and nose in the shape of a butterfly, and that can evolve leaving scars. Perinasal and perioral melanic spots suggest familial colonic polyposis or Peutz-Jeghers syndrome.

Form . The nose may be enlarged, as in rhinophyma and acromegaly. In rhinophyma it is also reddened and the growth is bulbous, due to hypertrophy of the skin, the sebaceous glands, the hair follicles and the connective tissue.

In some diseases associated with labored breathing, such as pneumonia and heart conditions, the nostrils dilate with each inspiration and contract with each expiration.

Other times, the back of the nose is depressed (saddle nose), due to erosion of the bones of the nose, as occurs in congenital syphilis or after repeated trauma.

Sometimes this has no pathological significance.

The nose is wide and flat due to edematous infiltration in the myxedema. On certain occasions it is deformed by lepromas and tuberculous lesions. In scleroderma, a sharp, narrow nose can be seen. Other times, small painful vesicles that follow the path of a nerve appear in the nose, caused by herpes zoster. Perinasal meliceric crusts are seen in impetigo.

Pain. Palpation of the maxillary and frontal sinuses can cause pain when externally compressed, which suggests that these cavities are occupied or affected by an inflammatory process (sinusitis); This is usually accompanied by fever and subsequent rhinorrhea and, relatively frequently, by generalized headache.

Transillumination of the maxillary and frontal sinuses is performed to determine the existence or not of sinus disease. Purulent secretions or intrasinusal masses will interfere with transillumination, while clear secretions will give a normal image.

Rhinoscopy allows observation of the nasal vestibule, mucosal abnormalities, permeability of the nasal passages, the character and location of infections, the appearance of the septum and committees, and also the presence of tumors (Figure 21-1). 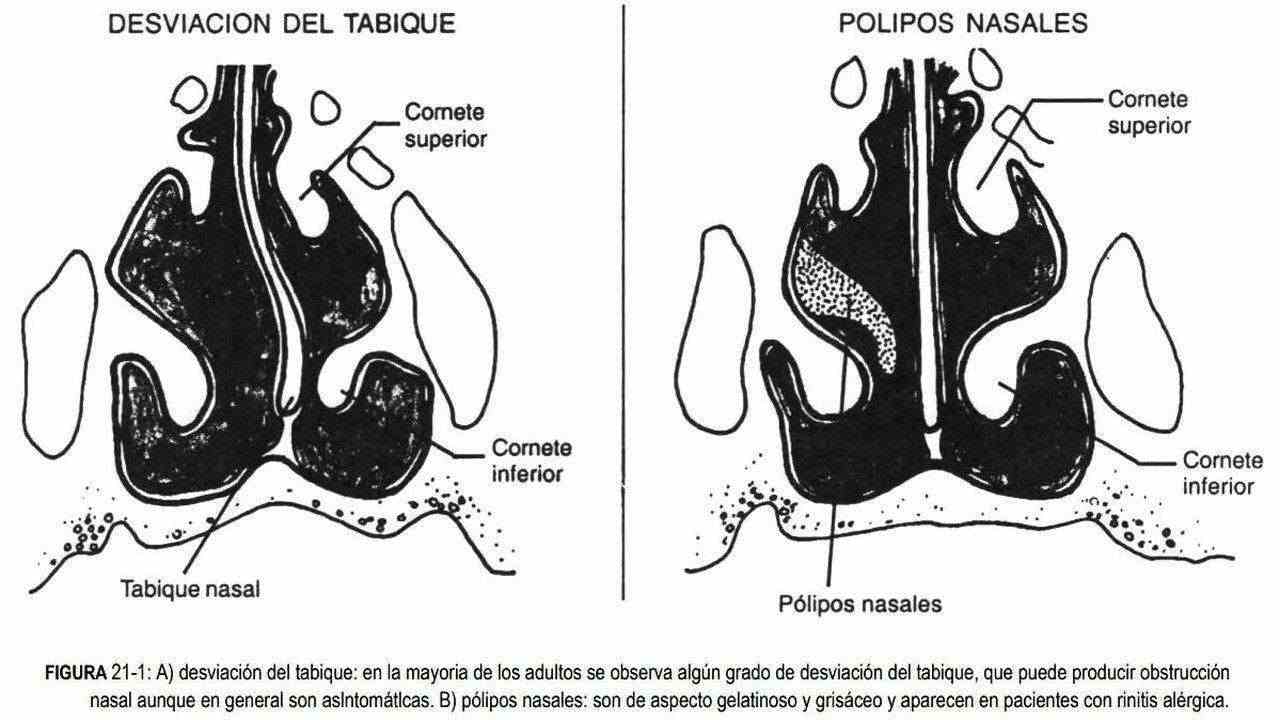 Boils are common in the nasal vestibule, and the rhinoscope is rarely required for diagnosis. The area is red, painful, swollen, and has the typical shape of a pustule, requiring careful handling. The mucosa is red and swollen in acute rhinitis, with watery nasal secretions, which can later become infected and become purulent. The mucosa is also edematous in allergic rhinitis, but it is pale and grayish in color. These same changes can be seen in non-allergic vasomotor rhinitis. It will be found congestive in cocaine addict, and foul-smelling crusts in chronic atrophic or ocena rhinitis.

Secretions . They can be infectious, allergic or vasomotor in origin. When the cause is allergic, it is accompanied by nasal itching, sneezing and tearing, and the secretions will be watery.

When it is viral they will also be watery, and purulent if there is a bacterial infection. In diphtheria the discharge is bloody and painless grayish membranes are seen.

Other abnormalities . Nasal obstruction can be unilateral or bilateral. When it is unilateral, it suggests a deviation of the septum, foreign body or tumor. When it is bilateral, the most common causes are rhinitis and in children, adenoid hypertrophy.

Septum perforation can be traumatic or infectious (syphilis, tuberculosis). Other times it is seen in systemic lupus erythematosus, or by the use of catecholamine sprays or in cocaine addicts.

On rare occasions, rhinorrhea and sinusitis can be observed, sometimes accompanied by a saddle nose. Lesions in the upper airways can form granulomas, as occurs in Wegener's granulomatosis. The presence of ulcerations of the nasal mucosa and gums, difficulty in breathing, pain in the nose, eyes and paranasal sinuses, with destruction of facial tissues, should lead to suspicion of a midline granuloma.