On inspection and palpation of the breasts, a series of alterations can be found.

Regarding size and symmetry, the finding of a difference in size between the two breasts is normal, although this may be due to the presence of a tumor. Similarly, contours may be altered by the presence of intramammary tumors (Figure 27-1, B). It should also be remembered that breast lumps often cause retraction of the skin (Figure 27-2, C).

Variations in skin color - for example, redness of the breast - can be caused by mastitis or inflammatory carcinomas.

The edema of the skin takes the characteristic of "orange peel" (Figures 27-1, C and 27-3, A), which is produced by retraction of the intradermal septa in the edema of the lymphatic blockade.

Venous engorgement of the breast is seen in tumors and carcinomas, and normally during infancy (Figure 27-1, A).

The shape of the nipple is sometimes modified by the presence of retractions or flattening. Any neoplastic process in the breast can pull and / or flatten the nipple (Figure 27-2, B).

The size can be increased or reduced by tumor processes. A tumor process called Paget's disease may also develop from the nipple, presenting with changes in the size and shape of the nipple, bloody discharge, ulceration, and areola inflammation (Figure 27-3, B).

The cracks of the nipple, frequent nursing mothers may also occur after trauma or tumor accompanying processes. In these cases, the temperature and sensitivity may be increased.

Nipple discharge (Figure 27-3, C) can be milky, serous, bloody, or purulent. They will be dairy in women who breastfeed or in hyper prolactinemias, of tumor origin or secondary to drugs; purulent in mastitis; and serous and bloody in tumor or infectious processes.

The direction is deflected in the processes that cause retraction, investment can be seen from the nipple (Figure 27-2, A). When the nipple inversion takes long years of evolution, it can be a normal finding and be unilateral or bilateral.

When it is of short evolution it acquires diagnostic importance. 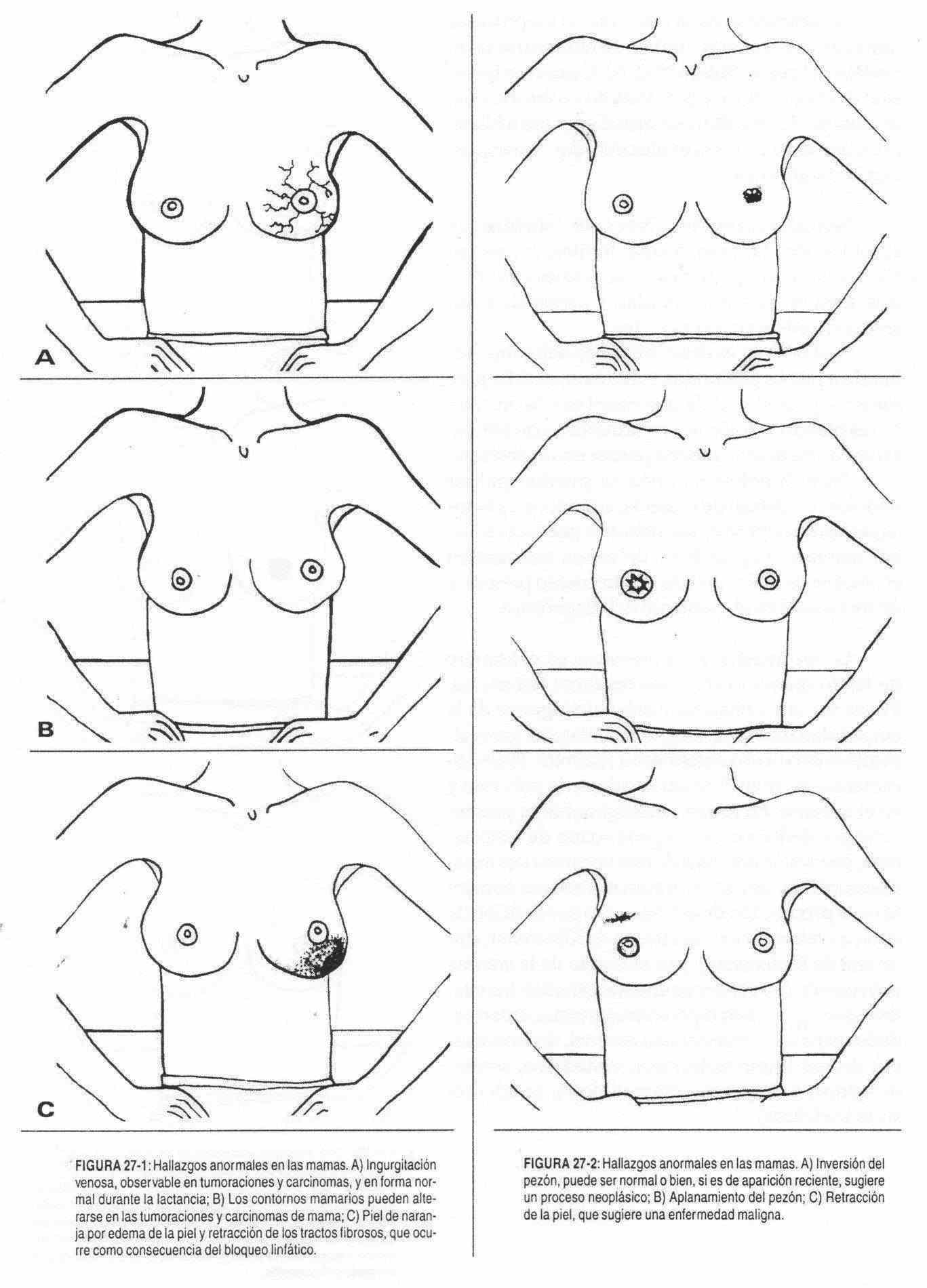 Breast nodules . They must be defined by their location, size, shape, limits, consistency, relationship with the superficial and deep planes, temperature, sensitivity, and presence or absence of satellite lymphadenopathy. 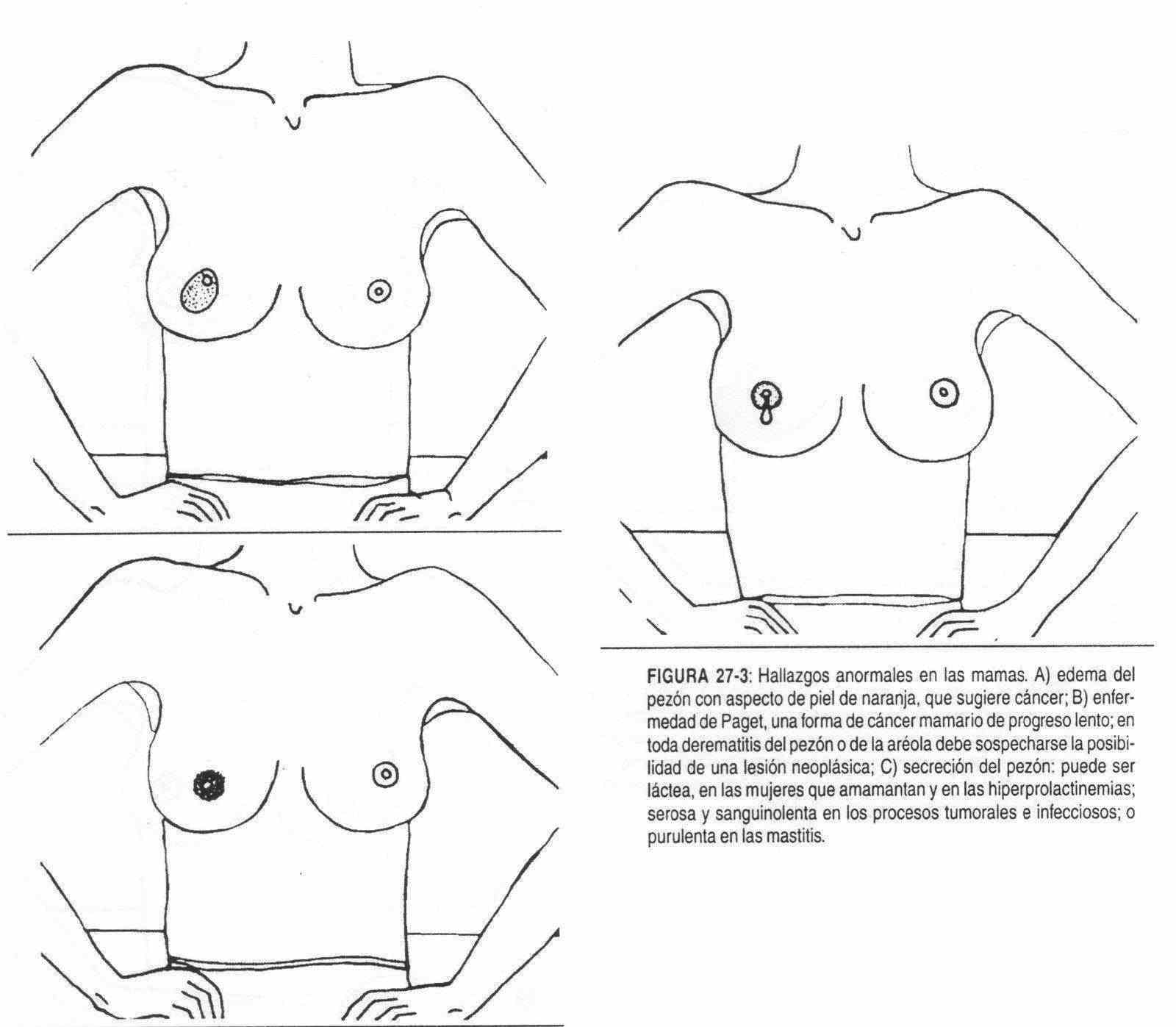 In man, nodules can also be felt below the areola, adhering to superficial and deep planes, due to poor breast tissue. The prognosis of breast cancer in men is poor, due to the frequent presence of metastases at the time of diagnosis.

Gynecomastia . It is the presence in men of breast tissue with feminine characteristics.

It can be unilateral or bilateral and must be distinguished from breast fat. When it is bilateral, it is usually due to a systemic disease. Physiologically it occurs in the newborn, in puberty and in the elderly. In pathological form, it can occur due to a deficiency in the production of testosterone, due to an abnormal action of this hormone (congenital anorchidism, castration, trauma), due to an increase in the production of estrogens or due to a deficiency in its metabolism (Klinefelter syndrome, Reifenstein syndrome) , due to an increase in the enzyme that converts androgens into estrogens in the conditions that occur with hyperandrogenemia, liver diseases, adrenal disease, thyrotoxicosis, by drugs (spironolactones, cimetidine, antiandrogens, estrogens, alphamethyldopa, tricyclic antidepressants).