Abnormal findings on examination of the male genitalia

First, it is important to determine abnormalities in sexual development. The testicles must be lowered, in the scrotum, at the time of birth.

A general inspection of the male genitalia should assess sexual development. If there is no increase in the size of the testicles in a 13.5-year-old patient, and there is no pubic hair, it is considered delayed puberty. There is also talk of pubertal delay if stage II to IV is not reached in 4 years. Stage II is characterized by an undeveloped penis, with testicles that are gaining size and a redder scrotum; the hair at the base of the penis is not curled. Stage IV shows an enlarged penis, in length and width, more enlarged testicles, darkening of the scrotal skin and curled pubic hair or occupying more space. If these changes occur before the age of 9, puberty is precocious.

In the examination of the penis we must evaluate the skin, the foreskin and the glans.

Different lesions (ulcerations, etc.) can be observed on the skin of the penis.

To examine the foreskin, the patient is asked to retract it, exposing the glans. The presence of a thick, whitish material is called smegma and is produced by normal secretions from the sebaceous glands of the balanopreputial sulcus; This discharge will or will not be found according to the patient's hygiene habits, and it does not exist in circumcised patients. If the foreskin is small, and cannot be retracted over the glans, the patient has phimosis. Paraphimosis is the retraction of the foreskin to the balanopreputial groove with the impossibility of returning it to its usual place due to edema of the glans.

When the glans is compressed, yellowish-white toothpaste-like secretions may appear in cases of infectious urethritis of different etiology.

Hypospadias is the presence of the urethral meatus out of its usual place; in this case on the ventral surface of the penis. When it is found on the dorsal aspect, it is called epispadias and is usually accompanied by urinary incontinence; it is less common than hypospadias.

Syphilitic chancre is a non-painful, indurated-edged ulcer that feels like a nodule under the skin, with a clean base, that appears 15 to 30 days after sexual contact with a Treponema pallidum-infected partner. It is accompanied by painful inguinal nodes that can ulcerate and drain. Inguinal granuloma ulceration is superficial, erythematous, painful, and velvety in appearance. In lymphogranuloma venereum, the lesion of the penis is papular or vesicular. Genital herpes is manifested by multiple superficial vesicles on the foreskin and / or glans, followed by reddish-based, non-indurated, painful ulcers. When the infection is repeated, there are fewer injuries. Condylomata acuminata, or venereal warts, are lesions that develop on the glans or in the balanopreputial groove.

Squamous cell carcinoma can present as painless ulcerations, or nodules, and is most often seen in uncircumcised men. Peyronie's disease is characterized by the presence of non-painful, hard plaques located on the back of the penis; in erection there is a deviation of the member, with the penis in the shape of an arc. The penis, in addition, can be the site of various traumas (gored in bullfighters, bites).

A hydrocele is a non-painful collection of fluid in the vaginal tunic; Unlike hernias, the examiner's fingers (Figure 29-2, B and C) can pass over the liquid collection. The transillumination maneuver shows a liquid content due to its transparency. Sebaceous cysts present as thin, painless lumps of the dermis. Scrotal edema may be found in the anasarca.

The absence of one or both testicles on palpation of the scrotum, due to lack of descent, is called cryptorchidism. The testicles can be found in the inguinal canal, called ectopic testicles. If they are not palpated, they are presumed to be in the abdominal cavity.

Testicular tumors can present as a painless mass (Figure 29-1, B) or replace the testicle, which is enlarged in size, shape, and weight. The twisting of the testicle on its spermatic cord produces an acute, painful picture, with the testicle enlarged and raised.

The spermatocele or cyst of the epididymis is a painless and mobile cystic mass located in the path of the epididymis. Varicocele, or varicose veins of the spermatic veins (Figure 29-1, C), more frequent on the left side for anatomical reasons, can accompany infertility problems and is palpable like a bag of worms, creating a feeling of heaviness in the patient, which increases with standing. On rare occasions, it appears due to tumor compression of the left renal vein.

Tuberculous epididymitis presents with an indurated epididymis, sometimes painful, with thickening and irregularities of the vas deferens. In acute epididymitis, a painful mass is palpable, initially distinguishable from and later becoming part of the testicle (Figure 29-2, A). In acute orchitis, the testicles are large and painful, with a reddened scrotum. 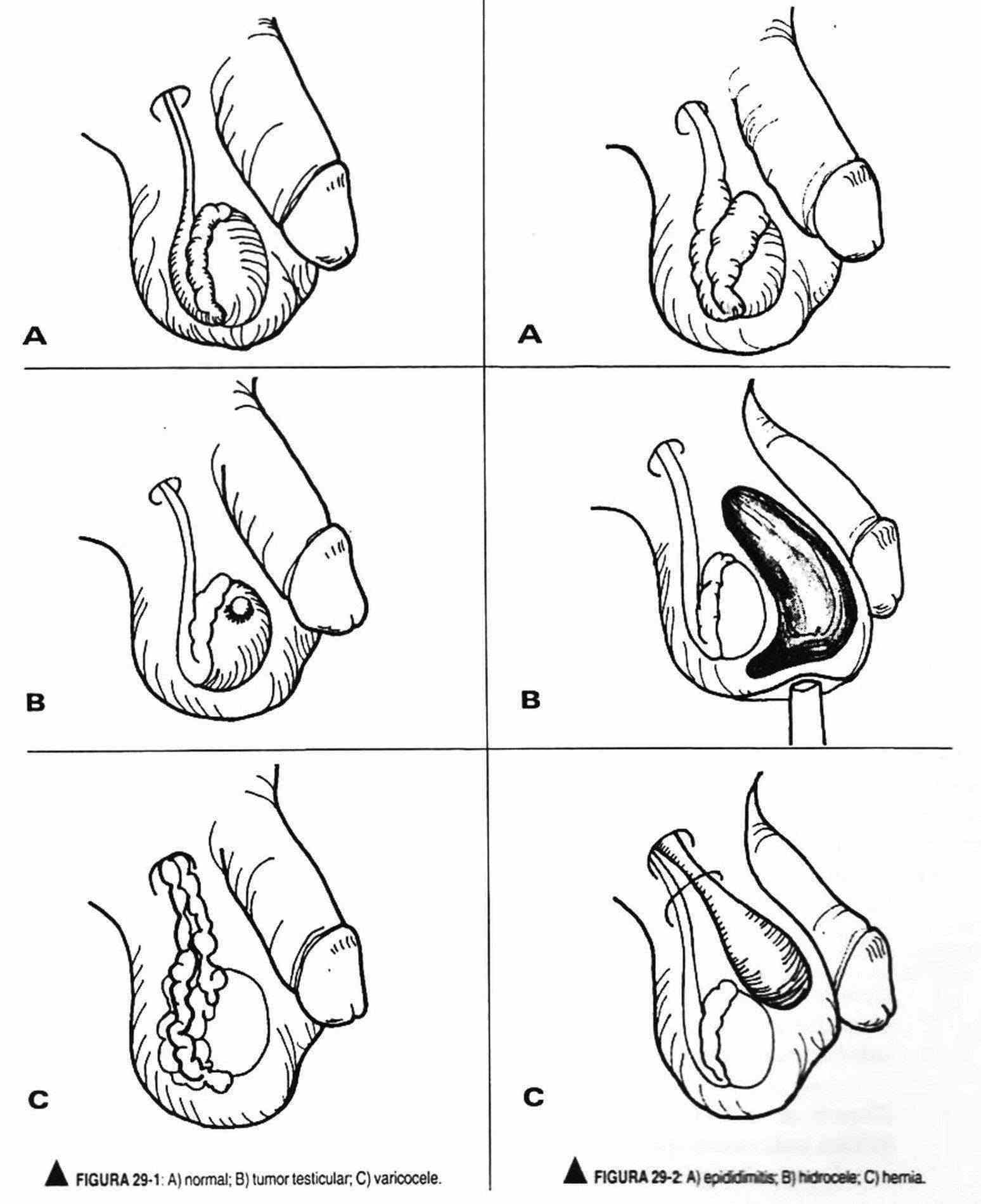 The examination of the hernial points will be performed in the supine position and standing. Its location (crural, inguinal, incisional), size, shape, consistency, sensitivity, reducibility, coercibility, characteristics of the hernial ring, and response to maneuvers that increase intra-abdominal pressure will be described.

In the inguinal region we must palpate the superficial orifice of the inguinal tract. To do this, the index finger of the examining hand will search through the scrotum for the exit of the spermatic cord between the pillars of the greater oblique, requesting the patient to increase intra-abdominal pressure to allow the hernia to collide with the index finger. The crural region should be palpated, and the patient should be asked to cough to see if a mass appears.

A hernia will be reducible when it can be reintroduced by sustained pressure or if it returns spontaneously to the abdominal cavity when the individual lies down. We speak of an incoercible hernia when, once reduced, it protrudes again through the hernial ring.

When the blood supply is compromised, the hernia is strangulated. The rings should also be palpated. In narrow and deep hernial rings the hernia is more likely to strangle.