Abnormal findings on examination of the female genitalia

The pelvic examination begins with a close inspection of anatomical features, such as the hair distribution, the labia majora and minora, the urethral orifice, and the introitus of the perineum.

This inspection should detect irritation or discharge or the presence of lesions at these levels. 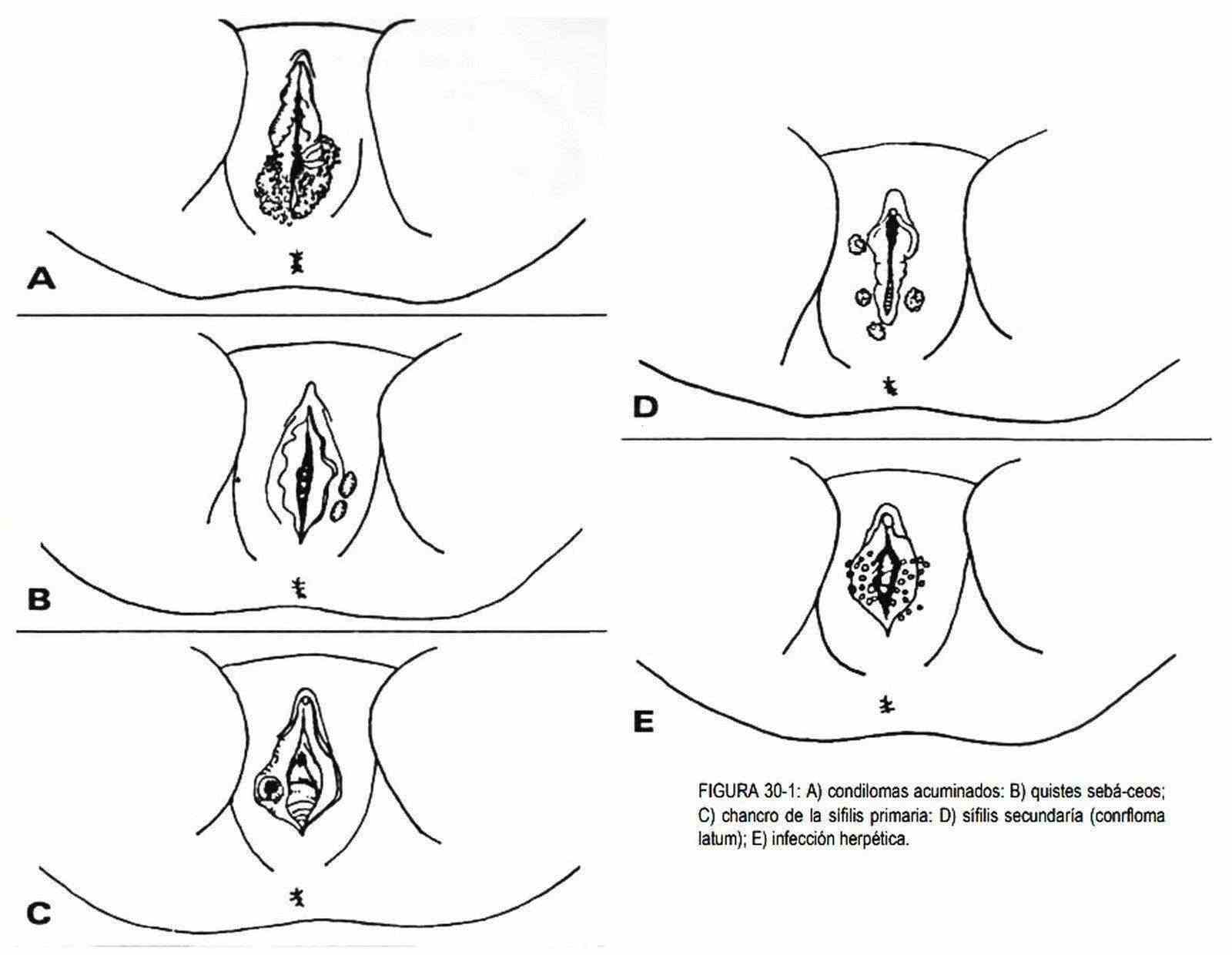 The distribution of pubic hair will allow information on sexual development to be obtained.

In a patient over 12 years of age who does not have pubic hair or does not have developed breasts, puberty is considered delayed. Inspection of the external genitalia should first look for the presence of the hymen, the characteristics of the clitoris, and the existence of lesions at the base of the pubic hair, ulcerated lesions, and sebaceous cysts.

At the vulvar level you can find:

Condylomata acuminata or venereal warts . They are warts located at the level of the lips or in the vestibule, of viral origin (Figure 30-1, A).

Sebaceous cysts . They are cystic nodules, rounded, elastic, small, located at the level of the lips or in the interlabial sulcus. They may be yellowish in color.

Chancre of primary syphilis . It is a painless, firm-based ulcer with indurated edges, which may be located on the labia, or within the vaginal canal (Figure 30-1, C).

Secondary syphilis . This is the so-called condyloma latum, which is seen as round or oval papules covered by a grayish exudate (Figure 30-1, D).

Herpetic infection . It is manifested by small stellate vesicles, with an erythematous base, more numerous at the beginning of the disease. They are extremely painful (Figure 30-1, E).

Leukoplakia . It is rare and is characterized by the presence of whitish plaques on the inner side of the labia majora or minora. It is observed between 40 and 60 years.

Carcinoma of the vulva . A painless, non-healing lesion, whether ulcerative or proliferative, in an elderly woman should suggest vulvar carcinoma. It can be located on the labia majora, labia minora, or meatus (Figure 30-2, A).

Bartholino cysts . These glands may be swollen, painful, and warm as a consequence of acute or chronic infection (Figure 30-2, B). The pain is sharp and lancinating, the mucosa is tight and shiny, with edema of the lip. When the mucosa is perforated it removes a thick and foul-smelling pus.

Sometimes the slough of the wall is reached, with ulcers that are difficult to heal. Urethrovulvar or rectovaginal fistulas can occur.

Skene's gland infection . These glands located behind the urethra, can be the seat of infectious processes.

Cystocele . The anterior wall of the vagina can protrude due to the descent of the bladder. It should be searched while the patient exerts an effort (Figure 30-2, C).

Rectocele . The posterior wall of the vagina can descend when pushed by the rectum during the Valsalva maneuvers (Figure 30-2, D).

Urethral caruncle . It is seen as a reddish, polypoid proliferation that protrudes from the urethral meatus (Figure 30-2, E).

After the inspection, the examination is carried out with the vaginal speculum, observing the characteristics of the neck. 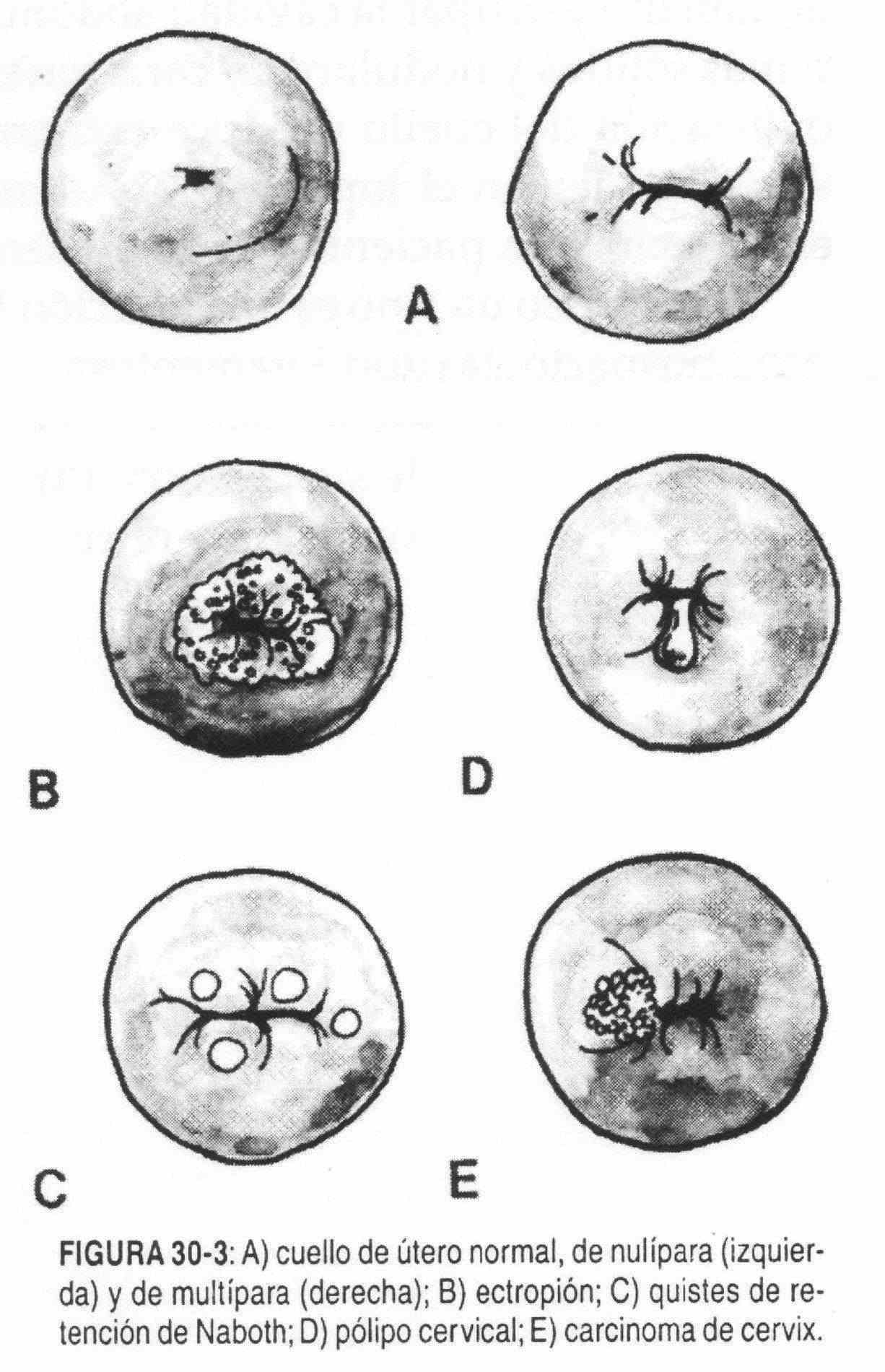 This can be deformed by traumatic scars caused by difficult deliveries.

Ectropion . It is a formation of columnar epithelium in the cervical canal (Figure 30-3, B), as a result of which the mucosa of the central lumen of the neck is reddish instead of the usual pinkish color and bleeds easily. It is important to differentiate it from carcinoma of the cervix.

Cervical polyps . Polyps may appear in the endocervical canal that protrude into the neck lumen (Figure 30-3, D). They are fragile and reddish in color, and difficult to differentiate clinically from polyps that originate in the endometrium.

Carcinoma of the cervix . It begins with a bleeding granular surface, more consistent than the neck tissue near the cervical os, and grows to a cauliflower appearance (Figure 30-3, E).

Vaginitis . They are inflammation of the vagina, acute or chronic. They can be caused by:

Craurosis . The vulva is atrophied and is seen after physiological or surgical menopause. There is tightness of the vagina with retraction of the labia and clitoris. The mucosa is shiny, dry and smooth and bleeds easily. The itching is intense and can be complicated by leukoplakia.

Subsequently, mono and bimanual palpation is performed. Pain when mobilizing the cervix and adnexa suggests the presence of pelvic inflammatory disease. A uterus palpable with only one hand suggests the existence of pregnancy or benign or malignant tumors. Fibromyomas of the uterus are benign tumors that can be large and are seen in women between the ages of 30 and 40. On palpation they are hard, medium, mobile or fixed, irregular; if their growth is unilateral they can be confused with an ovarian tumor.

The ovaries should not be palpated three to five years after menopause; otherwise, we must consider the presence of an ovarian tumor. Ovarian cysts can become large and occupy the abdominal cavity, and they tend to be softer than tumors; These are more solid and nodular, and are characteristically not painful. In ectopic pregnancy, mobilization of the neck causes extreme pain. There is a mass located in the ruptured tube, and pain and stiffness in the hypogastrium. In addition, in the interrogation the data of lack of menstruation is obtained. The patient may present with symptoms and signs of shock.

Uterine prolapse is a common condition, due to repeated pregnancies, early postpartum ambulation, ligamentous laxity, and is manifested by a descent of the cervix and uterus through the vaginal canal. It can be accompanied by cystocele and rectocele.

The position of the uterus can be variable according to the greater or lesser relaxation of its suspension means. The most common is to find it anteverted, although it can be found in retroversion and retroflexion.