Among the branches of semiology, is clinical semiology, which refers to the study of the signs and symptoms through which a disease manifests itself.

In the case of ophthalmology, it is very useful to know at least the most general and simple techniques of examining a patient.

The semiological study is divided into:

Through the questioning, an attempt is made to establish the reason why the patient comes to the consultation. This is the instance of the exam where the experienced doctor stands out the most, since by knowing more conditions and their symptoms, the more quickly he will be able to orient himself through the data obtained from the conversation with the patient.

The reasons for consultation most frequently manifested by patients in the ophthalmology office are: decreased vision, pain, red eye, secretions, lacrimation, photophobia, foreign body sensation, asthenopia (frontal headache, visual fatigue) and trauma.
It is also interesting to know the age of the patient, the time of evolution, the form of appearance (sudden or gradual) as well as the intensity of it.

Direct examination: allows to evaluate superficial structures of the eye: skin of the eyelids and their eyelashes, lid opening, internal angle of the eye and lacrimal caruncle, external commissure, lid secretions, lid conjunctiva, conjunctival cul-de-sac, bulbar conjunctiva, transparency of the cornea , corneal reflex, symmetry or asymmetry of the eyeballs, protrusion of one or both eyeballs (exophthalmia), position and muscle movements (muscle function and conjugated movements), presence of eye conditions such as: redness or congestion, etc.

This test allows us to evaluate the anterior segment of the eye (cornea, anterior chamber, iris, pupil and, through it, the lens).

To do this, a lateral or oblique light and a focal light must be incident. The light source is located to the side and in front of the patient about 50 cm away; interposing between the patient and the light source a magnifying glass of 13 to 20 diopters so as to make the light rays converge on a small area, which will be examined.

Slit lamp: allows examination of the anterior portion of the eyeball, except when using the Goldmann lens (which allows evaluation of the posterior pole). The slit lamp is a low-power microscope with very good focusing power combined with a high-intensity light source, which can vary in size, shape and color, depending on the diaphragm that is fitted. The observation is made through a biomicroscope with a variable magnification, generally 10 or 16 diopters.

Direct ophthalmoscopy: Studies the posterior pole of the eyeball (it is the method par excellence to evaluate the refractive media and the retina).

Direct ophthalmoscopy: Direct ophthalmoscopy is an extremely important technique in physical examination, offering a direct, straight, monocular, and non-inverted image of the retina. Using this technique, the fundus (macula, papilla, vessels) can be observed, but also the rest of the ocular structures (eyelids, anterior segment, intraocular media) .The doctor carries out this examination by projecting a beam of light through the pupil, with the use of an instrument called an ophthalmoscope.

Indirect (binocular) ophthalmoscopy: The doctor uses mild mydriatics such as Tropicamide 1% and then projects a very bright light into the eye, using a head-worn instrument (similar to a miner's flashlight). Some pressure can be applied to the eyeball, using a small blunt instrument. The doctor will ask the patient to look in different directions. Indirect ophthalmoscopy gives an inverted, binocular and magnified real image.

Tonometry:It is necessary to emphasize that in every person who attends the ophthalmological consultation, even routine, the eye pressure should be taken. It is a generalized measure nowadays in all ophthalmological centers for the prevention of glaucoma, and that together with the fundus examination, justifies that even the simplest prescription of glasses should be carried out by the ophthalmologist. It is usually done with the Goldmann applanation tonometer that is incorporated into the slit lamp (it is the most used today). In the case of the general practitioner, it can also be done manually, by bidigital palpation of the patient's eye; making a comparison with the stiffness of the other eye or the doctor himself. Although it is a method of little scientific value, it gives an approximate idea of ​​intraocular pressure, especially in the attack of acute glaucoma; where ocular resistance to palpation is greatly increased.

In practice, the subjective examination includes the study of various components of visual function:

Visual Acuity (VA): Evaluates protopathic or central discriminative vision of the retina (the macula). It must be quantified for both far and near vision, with each eye separately (starting with the right) and taking care not to compress the occluded eye as a false decrease in vision could be obtained; the evaluation is first performed without optical correction and then with optical correction. Close vision can be assessed by giving the patient booklets with text or graphics; optotypes are used for far vision  (signs and / or symbols graphed in order of decreasing size on a poster or panel, these are placed at a prudent distance, between 4 and 6m, since from this distance accommodation is not necessary to see clearly).

In case of decreased VA it is important to determine the cause. In the event that vision can be totally or partially improved with the use of glasses, one would be facing any of the refractive or ametropia vices (myopia, hyperopia, astigmatism or presbyopia).

Once the aforementioned conditions, which can be called false or apparent decreases in visual acuity, are eliminated, all the true ones are present, which are produced by anatomical or functional alterations of the eye.

Among the functional ones are ocular pathologies that cause inflammation (in any of the layers of the eye), infections, retinal detachment, macular pathology, glaucoma and corneal alterations such as dystrophies.

It is necessary to carry out this study especially when there is subnormal vision, symptoms of neurological pathology, alterations in the papilla and for the diagnosis and evolution of glaucoma.

The most accurate way to assess the visual field is through computerized perimetry or perimetry, after optical correction of the patient.

Of the visual field alterations, those of greater importance can be named such as scotomas (absolute or relative), hemianopsias (homonymous or heteronymous, unilateral or bilateral) and quadrantopsies. (fig. 1) 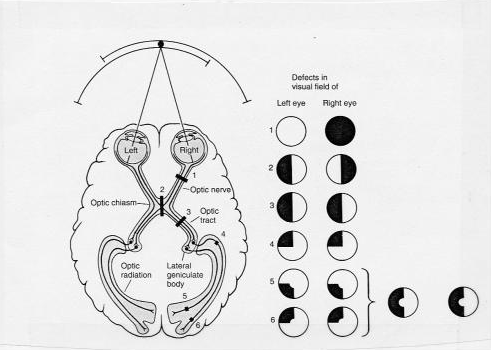 In front of a patient who consults for a red eye, it must be established if it is a minor irritation or if it is the manifestation of a serious eye condition.

Apart from the redness of the eyelid edges (blepharitis, stye), which in general do not show severe pathology, it is spoken with the property of a red eye when the area that acquires that color is the visible area of ​​the sclera and the conjunctiva that covers it , which is normally white.

One of the causes is subconjunctival hemorrhage, which alarms the patient and in whom, if repeated, it is necessary to measure blood pressure and study capillary permeability and coagulation.

Hyperemia, the cause of the greatest amount of ocular redness, requires an important qualitative analysis for the differential diagnosis.

A less common cause of eye redness is caused by vascularization of the cornea, which is usually avascular. Superficial vascularization, which comes from the conjunctiva and continues with its vessels and appears in superficial corneal inflammations, and a deep vascularization -as arborization plumes- from the scleral vessels and which is observed in inflammations are recognized. deep. Also, and usually due to trauma, the red eye is due to the formation of a hyphema (blood in the anterior chamber).

It is now in a position to make a summary of the symptoms and signs of the most important causes of red eye:

To reach the differential diagnosis of a red eye, it is essential to study the symptoms and signs that accompany it.